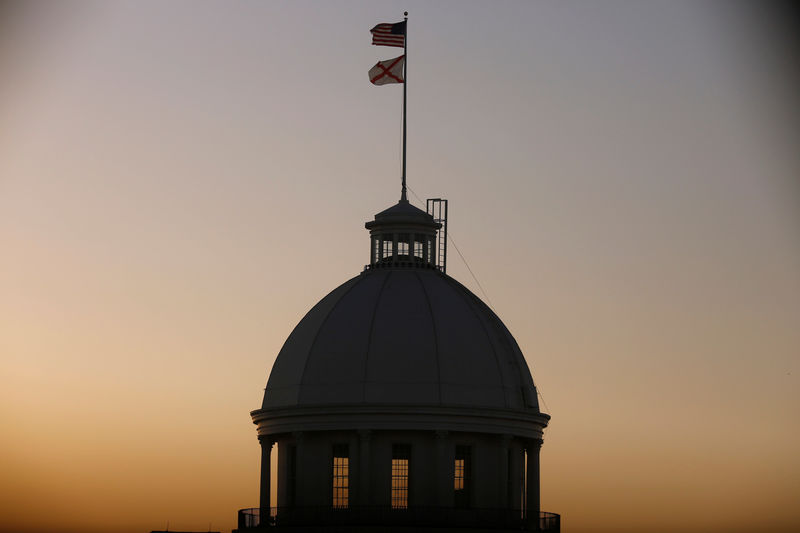 © Reuters. The U.S. Flag and Alabama State Flag fly over the Alabama Governor’s Mansion as the state Senate votes on the strictest anti-abortion bill in the United States at the Alabama Legislature in Montgomery

Ahead of the 2020 election, when Democrats will try to parlay support among women voters to oust Trump from office, the issue of abortion is already featuring prominently in many Democratic candidates’ case to voters.

Most of the Democrats seeking the party’s presidential nomination blasted the Alabama measure, which was signed into law by Governor Kay Ivey on Wednesday. The strictest U.S. abortion law, it bans nearly all abortions in the state, even in cases of rape and incest.

“This is risky for Republicans and could benefit Democrats,” said Joshua Wilson, a political science professor at the University of Denver who has written two books about the politics of abortion.

Democrats have spent years arguing that Republicans are pursuing a “war on women,” trying to turn that fear into electoral support.

Republicans have rallied their base by promising to roll back the legalization of abortion, building on strident opposition to abortion among evangelicals and the religious right.

Democrats took control of the U.S. House of Representatives in the 2018 midterm elections in a landslide fueled largely by strong support from women in suburban districts.

“Republicans lost 2018 because of a record-breaking gap among women, and now they’re doubling down on that problem and pouring gasoline on the fire,” said Democratic strategist Jesse Ferguson, who worked for Hillary Clinton’s 2016 presidential campaign and on previous campaigns for the Democratic Congressional Campaign Committee.

The new hard-line abortion laws could bring some benefits to Republicans, however, said Andrew Lewis, a political science professor at the University of Cincinnati, who wrote a book about conservative Christian politics and abortion.

Trump’s appointment of Brett Kavanaugh to the Supreme Court to replace Anthony Kennedy last year has created a conservative court that many activists believe may make overturning the 1973 landmark abortion ruling in Roe v. Wade a reality.

“I expect that these strict restrictions on abortion will shore up any potential cracks in conservative Christian support for the Trump campaign,” Lewis said. “The momentum around conservative Supreme Court appointments and state-level abortion restrictions will justify why many have supported Trump.”

The change in the court may be motivating Republicans to push through the bills more than electoral politics, said Claire McKinney, a professor of government and gender, sexuality and women’s studies at William & Mary College.

Abortion foes say the various bills are intended to draw legal challenges, in hopes that a case will land before the Supreme Court.

“This moment in abortion politics is unprecedented,” McKinney said. “I would speculate that these policies risk larger turnout in favor of Democratic candidates for the majority of Americans who do not support criminalizing abortion.”

While there are strident opinions on both side of the abortion debate, most people operate in a “mushy middle,” the University of Denver’s Wilson said. They disapprove of abortion, but do not think it should be illegal.

Those are the voters Republicans stand to lose by passing laws that legitimately endanger abortion rights, Wilson said.

“If Democrats can really capitalize on that,” he said, “they could mobilize moderates against the Republicans.”