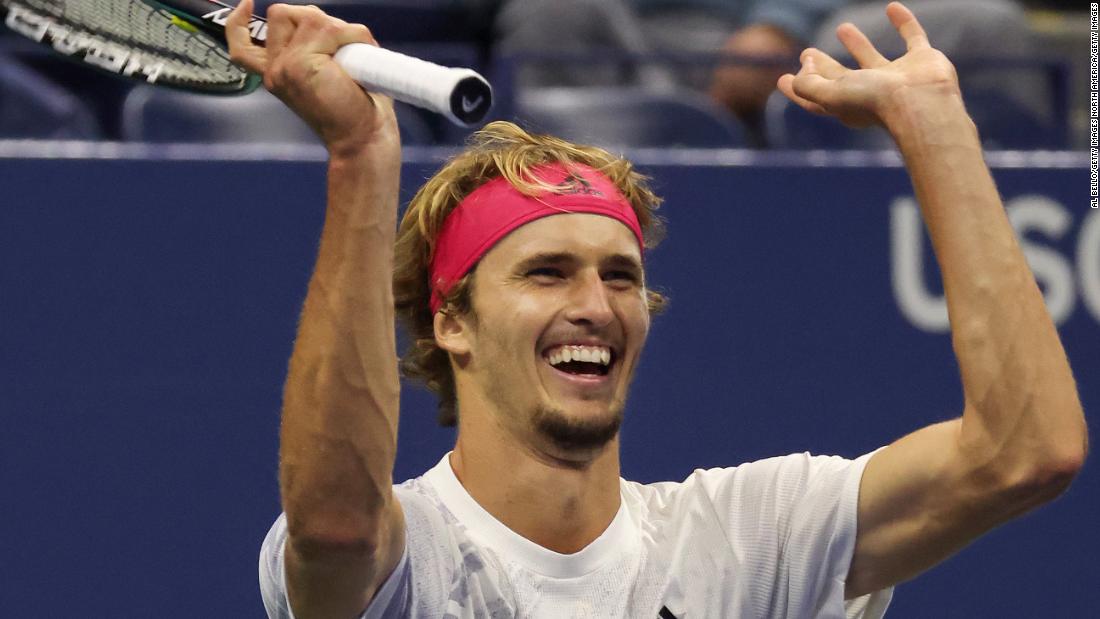 “I looked at the scoreboard after two sets,” Zverev told reporters. “I thought to myself, ‘Look, I’m playing a Grand Slam semifinal, I’m down 6-3, 6-2 in a match where on paper I’m supposed to be the favorite.’

“I needed to play better, start something new. I thought, ‘Okay, I’m going to go set by set, we’ll see how far I can get.’ It turned out well in the end.”

The 23-year-old became the youngest men’s Grand Slam finalist since Novak Djokovic, who was the same age in 2010 when he landed in the final in New York. He will meet friend Dominic Thiem, who overcame deficits in the final two sets to beat 2019 finalist Daniil Medvedev 6-3 7-6 (7) 7-6 (4).

Djokovic will forever be tied to this year’s tournament, having been defaulted — against Carreño Busta — in the fourth round when he struck a ball that hit a line judge in the throat.

The 17-time Grand Slam champion had previously been undefeated in 2020. And if that wasn’t enough to make him the favorite, his three biggest Grand Slam rivals — Roger Federer, Rafael Nadal and Stan Wawrinka — all didn’t play at the US Open.

Nadal and Wawrinka cited coronavirus concerns, while Federer is on the mend from knee surgery.

So Djokovic’s departure opened up the draw.

Zverev unquestionably benefited, but making a maiden Grand Slam final always seemed like it was a matter of when, not if. The world No. 7 owns victories over Djokovic, Nadal and Federer, even topping Djokovic and Federer on back-to-back days to triumph at the year-end championships in 2018.

The Grand Slams are a different proposition, and it took a while for the German to beat a top-50 player at a major. But once he passed that hurdle, he made a Grand Slam quarterfinal and this year Zverev has reached back-to-back Grand Slam semifinals, now going one better at the US Open.

He also earned his first victory from two sets down.

Zverev won’t be the favorite Sunday given his 2-7 record against the Austrian but that should suit him, since he appeared nervy to begin his quarterfinal against Borna Coric and again versus the 27th-ranked Carreño Busta, who moves well, returns well and does just about everything well.

Yet he lacks a huge weapon, unlike Zverev.

Carreño Busta didn’t need to be much more than solid in the first two sets as Zverev, playing not far from Broadway, appeared to be suffering from stage fright.

Zverev’s big serve wasn’t working and he was routinely missing from the baseline, particularly with his forehand.

But down two sets, he got the serve going and swung more freely while Carreño Busta dipped, particularly in the fourth set, with the finish line in sight. The Spaniard also took a medical timeout after the fourth set, like he did against the flashy Denis Shapovalov in the quarterfinals.

In the midst of his comeback, Zverev took exception to Carreño Busta twice going straight at him when he was stranded at the net. In truth, it was mild stuff.

Zverev only lost seven points behind his first serve in the final three sets and struck 24 aces overall. Whereas he hit 11 more unforced errors than winners in the first two sets, in the last three he was plus-25.

Thiem contested the big points better against Medvedev in what some called the real final.

Medvedev’s on-court conduct last year initially got the fans against him and who knows what their reaction would have been when the Russian received a warning for unsportsmanlike conduct for crossing the net to look at a mark after he wasn’t allowed to challenge his serve that he thought was long on break point.

The fans have been kept away this year due to the pandemic.

Thiem’s return went in play but the world No. 5 wasn’t allowed to go to Hawk-Eye by umpire Damien Dumusois and he was broken for 2-4 in the first.

“Sorry I think I killed someone,” Medvedev told supervisor Wayne McKewen, who was sat courtside. He then added sarcastically, “My sincere apologies to the US Open for crossing the net.”

Medvedev regrouped, only to relinquish leads.

He led 5-3 in the second and held the first set point in the marathon tiebreak, while he led 5-2 in the third and had a set point on his serve at 5-3.

Thiem — the highest-ranked player in the draw after Djokovic — will hope a right Achilles injury he sustained won’t be an issue Sunday.

Like Zverev, he is seeking a first Grand Slam title. In his three previous finals, he came up against Nadal twice and Djokovic.

“From the moment Novak was out of the tournament, it was clear that there’s going to be a new Grand Slam champion,” said Thiem, who topped Zverev in Melbourne in five sets. “From that moment on, that was also out of my mind. I was just focusing on the remaining guys left in the draw.

“Now it’s Sascha remaining, the last one, my opponent in the finals,” he said, referring to Zverev’s nickname. “I will fully focus on him and just go into that match like in the all other matches I was going in so far in this tournament.

“He’s a hell of a player. One of the greatest ones in last years.”

Despite the defeat, Carreño Busta will likely be content with his long stay in New York. Besides reaching the last four at the US Open, he also won the doubles title at the warmup Western & Southern Open.

The 29-year-old clearly likes the hard-court major, having made the semifinals in 2017 and the doubles final a year earlier, but he entered as the outsider in the semifinals.

Sure enough Zverev beat him, but barely.