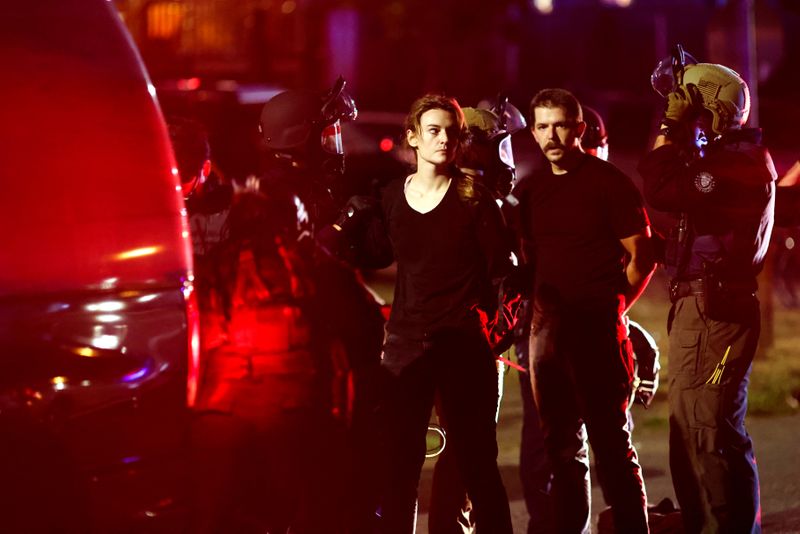 © Reuters. A woman and a man are detained by police officers on the 100th consecutive night of protests against police violence and racial inequality, in Portland

(Reuters) – Jacob Blake, the Black man who was shot in the back by a white police officer in Wisconsin last month, spoke out for the first time from his hospital bed as dueling demonstrations over racial justice and policing continued to roil a handful of U.S. cities.

In a video posted on Twitter, Blake, dressed in a green hospital gown, described being in constant pain after the shooting that left him paralyzed from the waist down.

The Aug. 23 shooting of Blake, 29, reignited protests over racism and police brutality that swept the United States after another Black man, George Floyd, died in May when a Minneapolis police officer knelt on his neck for nearly nine minutes.

The demonstrations have coincided with widespread upheaval over the social and economic consequences of the coronavirus pandemic, which has killed nearly 190,000 people in the United States, the highest death toll in the world.

The protests have also moved to the forefront of the presidential election campaign, with President Donald Trump now focused on a platform of law and order in his effort to be re-elected on Nov. 3.

At the start of the three-day Labor Day weekend, police in Rochester, New York, used tear gas to disperse some 2,000 protesters in the fourth night of unrest over the death of Daniel Prude, a Black man who died after an encounter with police in March.

Nine people were arrested and three police officers were treated at local hospitals for injuries sustained during the clashes, the Rochester police department said on Sunday.

Mayor Lovely Warren announced that Rochester was moving its family crisis intervention team and its funding out of the police department and into the Department of Youth and Recreation Services in response to the demands for change.

“I am committed to addressing these challenges in ensuring that change truly comes,” Warren told a news conference. She said she was glad that New York Attorney General Letitia James had moved to form a grand jury to investigate Prude’s death.

Violent clashes also rocked the city of Portland, Oregon, for the 100th day overnight. Demonstrators threw rocks and fire bombs at police who in turn used tear gas, leaving at least one person injured and leading to more than 50 arrests.

The Pacific northwestern city has remained another hotspot partly, according to some civic leaders, due to the deployment of federal troops there in July.