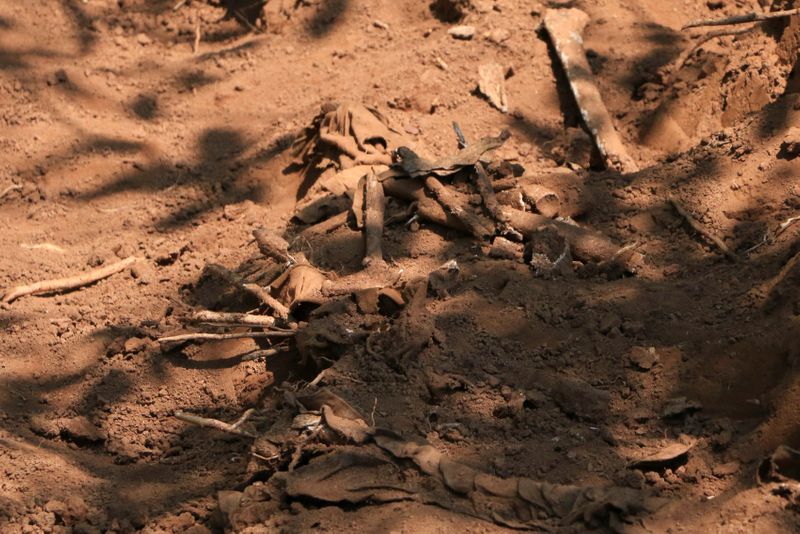 © Reuters. Remains of an unidentified person are seen at a 1972 mass grave as workers from the Truth and Reconciliation Commission dig to extract bodies in the Gikuzi village, Makamba Province

GENEVA/NAIROBI (Reuters) – Impunity for rape, murder and other abuses is still widespread in Burundi despite a change of government, a U.N. report released on Thursday said.

The report comes days after Burundi’s Truth and Reconciliation Commission, which is examining past atrocities and investigating mass graves, issued rare criticism of local leaders in charge during a 1972 massacre.

The U.N. report said there had been numerous rights abuses in Burundi connected to elections held in May. The new president, retired general Evariste Ndayishimiye, took power in June. He formerly served as the interior minister.

Ndayishimiye has promoted high-ranking military officers involved in human rights abuses, appointed some military officers to governorships previously held by civilians, and included two men in his cabinet under sanctions for rights violations, the report noted.

The security forces and youth wing of the ruling party, the Imbonerakure, continue to have almost total impunity for beatings, kidnappings and sexual violence, the report said.

A presidential spokesman referred questions for comment to the foreign ministry, which was not immediately available.

Ndayishimiye’s speech at his inauguration had hinted he hoped to make a break from the abuses committed under his predecessor, a former leader of a Hutu militia who took power in 1995 following 12 years of civil war.

Burundi has the same ethnic make-up as neighbouring Rwanda, whose 1994 genocide by Hutu militias killed around 800,000 Tutsis and moderate Hutus.

Burundi has also suffered periodic bouts of ethnic violence, and established the Truth and Reconciliation Commission to recover the remains of victims. But its mandate only covers the period until 2008, ignoring the most recent episodes of political violence.

On Tuesday, the commission’s president gave a rare speech that singled out local officials he said were responsible for a 1972 massacre, and said the group would question them.

Although the commission has opened dozens of mass graves, it rarely names those responsible for the violence.

Pierre Claver Ndayicariye was speaking as the group opened eight mass graves at Gikizi in the southern province of Bururi.

Most of the victims buried in the grave were Hutus, said Sinabajije Bonaventure, who was 20 at the time of the massacre. He said his younger brother was among the villagers taken to the court house and shot dead by security forces.

“We dug mass graves and buried them here, my little brother was among them,” he said.