The Washington Football Team announced Friday that it has released running back Derrius Guice amid allegations of domestic violence.

Loudoun County Sheriff’s Office spokesperson Kraig Troxell confirmed to USA TODAY Sports that Guice surrendered himself to authorities Friday evening and was later released from custody Friday on a $10,000 bond.

The 23-year-old running back faces three counts of assault and battery, one count of destruction of property and one count of strangulation, which is a felony in Virginia.

The charges stem from three separate assaults that allegedly occurred at Guice’s home in Ashburn, Virginia on Feb. 14, March 13 and April 17, according to Troxell. He added that the incidents were first reported to police in Montgomery County, Maryland, where the victim lives, and later investigated in a coordinated effort with the Loudoun County Sheriff’s Office, which became aware of the allegations on July 22. 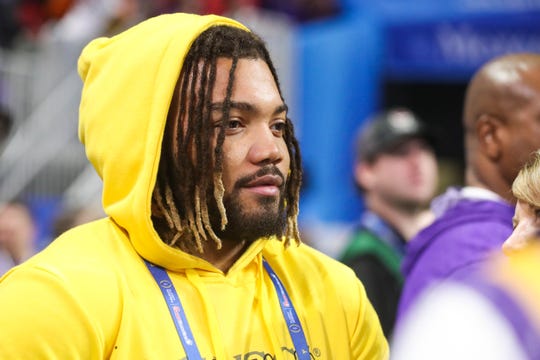 Attorney Peter Greenspun, who is representing Guice, wrote in an email late Friday night that his client “adamantly denies” the charges.

“Derrius will defend these charges in court, where a full vetting of the allegations will take place,” Greenspun wrote, “in contrast to actions by local law enforcement and the Washington Football Team that assumed the worst, directly contradicting every sense of fairness and due process.”

Washington moved quickly to cut ties with Guice, releasing the running back less than two hours after he turned himself in  — as documented by a reporter at The Washington Post at around 5 p.m.

The team said in a statement it had learned of “a potential domestic violence related incident” involving Guice on Thursday, alerted the league office and informed Guice that “he was excused from all team activity pending a review of this matter.”

“(On Friday) afternoon we learned that there were multiple charges filed against Derrius,” the team said. “Upon review of the nature of these charges and following internal discussions, we have decided to release Derrius immediately.”

Guice, 23, was selected by Washington in the second round of the 2018 NFL draft but has struggled with injuries throughout his young NFL career. The LSU product missed the entirety of his rookie season with a torn anterior cruciate ligament, and a series of knee injuries limited him to just 42 carries over five games in 2019.