One of the easiest ways for investors to diversify a portfolio of U.S. stocks is by allocating a portion of their assets to foreign stocks. When looking overseas, investors should note a key difference between large- and small-cap stocks that can potentially improve diversification.

Many foreign small-cap stocks often sell a majority of their goods and services into local markets. Consequently, their revenue streams are less diversified than many large-cap multinationals, which generate sales globally. But being more closely knit to local business conditions can cause foreign small caps to behave differently. Does the local focus of foreign small caps improve their ability to diversify a portfolio of U.S. stocks?

Take Swiss food and beverage company Bell Food Group (BELL) as an example. You wouldn’t be remiss for failing to recognize this purveyor of processed meats and convenience food; Bell isn’t exactly a household name in the United States. The firm had a market capitalization of just under $1.8 billion at the end of 2018, securely landing in the small-cap segment of the Swiss stock market. As such, it’s a constituent of several foreign small-cap index funds.

Let’s compare Bell Food Group with Nestle (NESN), another Switzerland-based food and beverage company. Both are listed on the Swiss Exchange, and both are members of the consumer defensive sector. But the similarities end there. Nestle is a corporate behemoth with a market cap just shy of $294 billion, more than 160 times that of Bell. Nestle’s size yields some benefits. The firm has a global presence, selling its wares on six continents to a wide array of consumers.

A global footprint (or lack thereof) is the most striking difference between these two companies, one that extends to their revenue streams. According Nestle’s 2018 full-year income statement, roughly 1.4% of its net revenue came from Switzerland. For comparison, Bell generated 61% of its net sales from its domestic market, making it substantially more dependent on the local Swiss business environment. Therefore, its value should ebb and flow with local business conditions. Bell’s top line is more likely to be affected if Swiss consumers change their consumption of snack foods, while Nestle can continue selling its products around the world.

This difference characterizes many foreign small-cap stocks. Smaller firms’ relatively closer ties to their local economies contribute, in part, to their lower correlations with global giants from both their home market as well as overseas markets. Exhibit 1 summarizes the relationship Nestle and Bell have with the MSCI USA Investable Market and MSCI ACWI ex USA indexes (foreign large-cap stocks).

This analogy can be extended to a wider selection of foreign stocks. Correlations and betas for the MSCI ACWI ex USA and MSCI ACWI ex USA Small Cap indexes with respect to the MSCI USA Investable Market Index are summarized in Exhibit 2.

The relationship these indexes have had with U.S. stocks has fluctuated over time. Exhibit 3 illustrates the 36-month rolling correlation of these two indexes with the MSCI USA Investable Market Index. 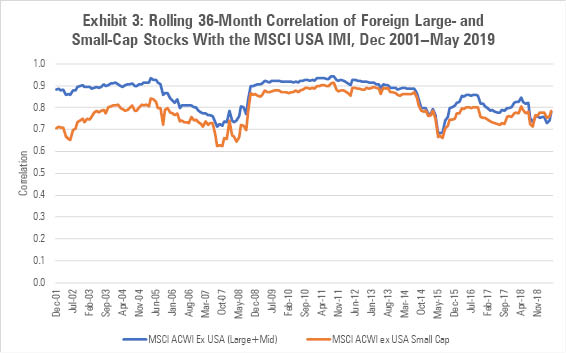 Clearly there has been a gap, with the advantage historically going to small caps, but it hasn’t been huge. A small diversification benefit such as this would not appear sufficient enough to justify a stand-alone investment in foreign small caps. Furthermore, the rolling correlations in Exhibit 3 show that that gap between large and small caps has been shrinking. What to do? I previously wrote about the risk/reward relationship in foreign small caps and concluded that gaining access to small caps was probably best accomplished with a broad-market fund that covers the entire spectrum of large, midsize, and small companies. That conclusion still stands. Any performance or diversification advantage that foreign small caps can offer will be baked into the performance of these more broad-based funds. Exhibit 4 summarizes foreign broad-market exchange-traded funds that have been assigned a Morningstar Analyst Rating.

Daniel Sotiroff does not own shares in any of the securities mentioned above. Find out about Morningstar’s editorial policies.