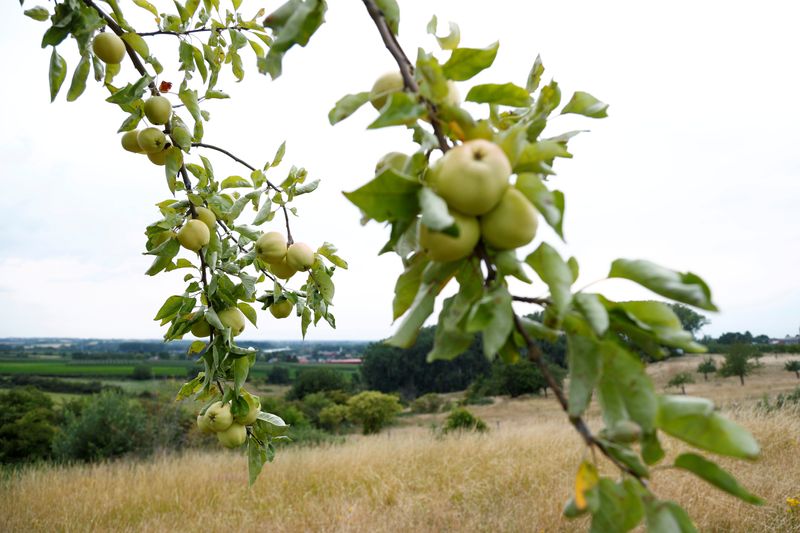 © Reuters. FILE PHOTO: Apples are seen on a tree in an orchard near Borgloon

PARIS/LONDON (Reuters) – Europe’s been eating more fruit under lockdown, by all accounts. The problem is, it could struggle to find people to pick it.

The region’s growers are preparing for upcoming summer and autumn harvests of apples, pears and grapes, including those of the Champagne variety – though they say they may have little to celebrate.

Many fear there will be resurgent outbreaks of COVID-19 in parts of Europe – like the current one in Spain – leading to localised lockdowns and the risk they will be cut off from the migrant workers they have long relied on.

“We are worried,” said Daniel Sauvaitre, head of a French apple and pear association and deputy head of fruit and vegetable federation Interfel. “We had the manpower we needed for the thinning work in orchards, and the harvest looks pretty good. But we may very well have a country that’s closing again.”

COVID-19 cases among agricultural workers, including on some fruit farms in southern France, are adding to concerns, with labourers often living in cramped conditions that make social distancing tough.

This was highlighted when more than 70 workers who were picking and packing vegetables tested positive at a farm in England earlier this month.

“For some farmers, normally 1% of their workforce would be British, this year for some farmers it is between 20 to 30%,” said Ali Capper, an apple and pear grower in central England who chairs the National Farmers’ Union’s horticulture committee.

In Portugal, berry farms turned to thousands of migrant workers from South Asia who were already in the country and lost jobs in tourism during the lockdown.

There are now worries that it might be harder to recruit locally for the apple harvest in September as many workers have now returned to their previous jobs outside farming.

In France, the Champagne grape harvest looms large in the farm labour cycle, with producers taking in between 100,000 and 120,000 seasonal workers every year, of which 27% come from abroad, according to Christophe Pernet, chairman of champagne winemakers group SGV.

Producers have been contacting universities and job centres to promote harvest work with a view to covering a shortage of foreign labourers if borders close again, he said.

Champagne grape growers are in a quandary; demand has been dented owing to the collapse of restaurant and tourism activity, which has squeezed finances. But even if it picks up, they may be unable to capitalise as migrant labour is drying up.

Big producers are likely to cut back on harvest volumes and take on fewer seasonal workers, said Richard Buxant, product manager at WiziFarm, a start-up that runs a job-matching website for farming.

Earlier in the year, European fruit growers had managed to navigate spring harvests of crops such as strawberries, melons, peaches and cherries as they fell around the time when lockdowns were first introduced and farms had enough labour in hand.

Locked-down shoppers across the world also embraced healthier eating, buying more fruit and vegetables and cutting spending on ready-made meals, according to a survey of nearly 11,000 people in 11 countries at the University of Antwerp.

However much of the migrant labour has since left for home amid the pandemic. And even if growers can find local replacements, some complain that they are not as productive, adding to costs.

On top of such unprecedented problems, there’s the more familiar, and perennial challenge for farming: the weather.

Joaquin Gomez, head of APOEXPA, an association of fruit producers and exporters in the southeastern Spanish region of Murcia, estimates local production fell 20% due to adverse weather, but demand and prices held up as households consumed more fruit during the lockdown.

“A campaign that in April we saw with much uncertainty has developed very normally,”.

Capper in England also expressed relief that, as least so far, the sector’s worst fears have not yet been realised.

“At the end of March it was difficult to see a way through it but we’ve got there through a combination of chartered flights bringing in eastern Europeans and growers recruiting locally. Both have worked but there is a long way to go.”