There’s not a lot of mystery to a stock fund’s returns. Take May 2019, which was a turbulent month for equities. What contributed to  Vanguard 500 Index‘s (VFIAX) 6.4% decline that month? To dig into it further, we’d look at the returns of each stock the fund holds and consider each stock’s weight in the portfolio (the market value of the position divided by the portfolio’s net asset value). The fund’s three worst-performing stocks that month– Intel (INTC) (0.9% of net assets),  Bank of America (BAC) (1.1%), and  Apple (AAPL) (3.7%)–each lost around 12% to 13%. But because Apple was more than 3 times as large as the other two positions, its 12.4% loss detracted more than 3 times as much as the others’.

Understanding a bond portfolio’s performance drivers, on the other hand, is a much trickier undertaking. For starters, there’s no widely available resource where you can look up monthly returns for individual bonds, like you can for stocks. One way to get a rough sense for what’s behind a bond fund’s performance is to compare the returns of relevant bond-market-sector indexes and consider the market-value-weight of a portfolio’s exposure to those sectors.

You may already know that these performance discrepancies are explained by duration, a measure that estimates how much a bond or bond fund’s value would decline or increase for a 1-percentage-point shift in bond yields. Long-maturity Treasuries have much longer durations than do short-term Treasuries, and their prices are thus much more sensitive to changes in yields. According to Morningstar’s calculations, Vanguard Long-Term Treasury Index’s portfolio had an average effective duration of 17.7 years at the end of April, whereas Vanguard Short-Term Treasury Index’s was 1.9 years.

Since these funds invest in different ranges of the Treasury yield curve, they’re sensitive, specifically, to changes in the yields of those maturities. Because the long-term fund invests in bonds maturing in 10 years or longer, it won’t be impacted by changes in the yields of short-maturity bonds. The short-term fund, meanwhile, only invests in bonds with one- to three-year maturities, so fluctuations in five-, 10-, and 30-year Treasury yields won’t have any impact on its returns.

The following chart shows a breakdown of Morningstar’s calculated duration for these two funds, as well as for  Vanguard Intermediate-Term Treasury Index (VSIGX). The chart gives us a better sense of the funds’ sensitivities to specific points on the Treasury yield curve. 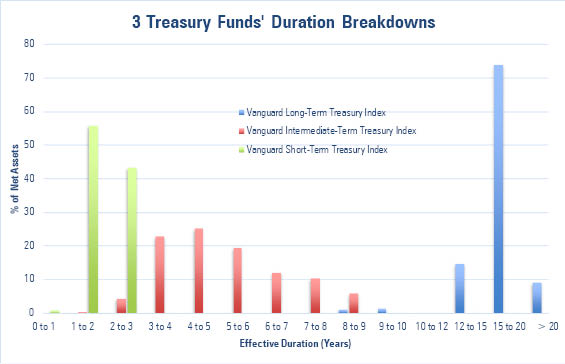 Practically speaking, though, a U.S. Treasury index fund’s overall average effective duration is reasonably informative about that portfolio’s risks and how it’s likely to perform in different environments. The ability to break down duration in this way can be more helpful for funds whose average durations come out close to each other, but whose portfolios get there in different ways. One portfolio may hold long- and short-duration bonds, for example, while another may hold mostly intermediate maturities.

Things get a lot more complicated for funds that invest across sectors and around the globe, not to mention those that implement short positions via derivatives, as many do. Under those circumstances, examining how much each underlying position contributes to a fund’s duration can provide us with better insight into that portfolio’s risks.

Take  Templeton Global Bond (TPINX), for example. Franklin Templeton provides the following country-exposure breakdown for the fund on the company’s website. While this information is useful, it’s incomplete. It would be even more helpful to know the duration of the fund’s holdings in each of those countries in order to understand how sensitive the portfolio’s value is to changes in those countries’ government-bond yields. 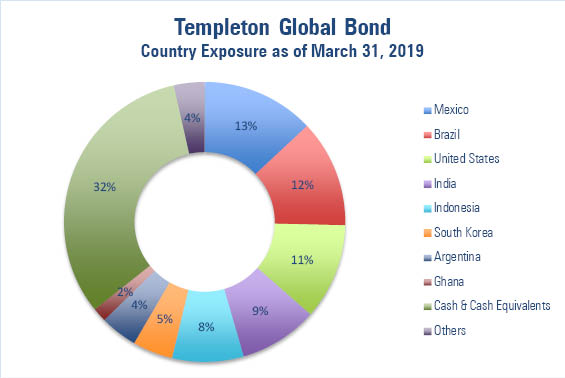 If the information in this graph were all we knew of the fund’s exposure to the United States–that the position’s market value accounted for roughly a tenth of the fund’s net assets–we would completely misunderstand the risk of its U.S. interest-rate positioning. The fund’s overall average effective duration stood at negative 2.2 years at the end of March. In general, when a bond fund’s duration is negative, that means it should benefit from rising yields (the opposite of how a traditional bond fund with a positive duration would behave), and managers typically achieve a negative duration by taking a short position in a market via interest-rate swaps or futures. So, which part of the market is the fund shorting? For Templeton Global Bond, the fund’s negative-2.2-year duration comes from an even larger negative U.S. duration implemented through interest-rate swaps.

Few asset managers make this information widely available to investors, but some are more forthcoming than others. PIMCO, for example, reports detailed sector-exposure breakdowns for each of its U.S. mutual funds, both as a percentage of the fund’s NAV and a percentage of its duration. The firm provided the following high-level sector exposure data for  PIMCO Total Return (PTTRX) on its website as of April 30, 2019. 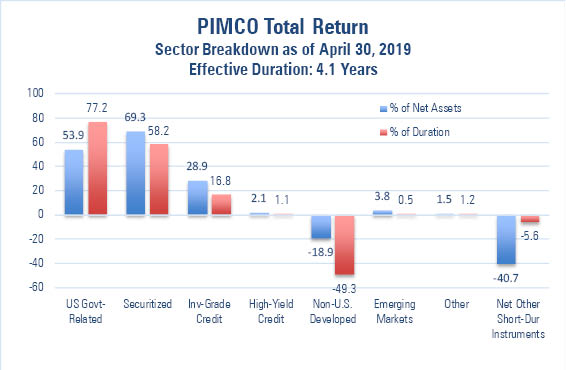 While the fund’s short-selling of debt in non-U.S. developed-markets is evident in that sector’s market-value-weighted figure of negative 18.9% of net assets, that position’s even larger negative value for duration–which amounts to roughly negative 2.0 years (that is, negative 49% of 4.1 years)–gives us better information about how bearish a view on non-U.S. developed-markets rates that the portfolio expressed. We’d need more detail–specifically which countries’ debt the fund had shorted and which maturities–to anticipate even more precisely how the fund might respond to yield changes in those countries, some of which PIMCO makes public. For example, in duration-weighted terms, short-sold exposure to Japanese government debt (implemented through derivatives) represented roughly half of the portfolio’s developed-markets short.

Seeing how much individual sectors contribute to the durations of these portfolios provides us with better information about their risks. But while duration exposure information is an essential tool for evaluating many bond funds, it can be challenging to get. No portfolio manager would run a fund without it, though, and you shouldn’t have to buy one without it, either.

Miriam Sjoblom, CFA does not own shares in any of the securities mentioned above. Find out about Morningstar’s editorial policies.