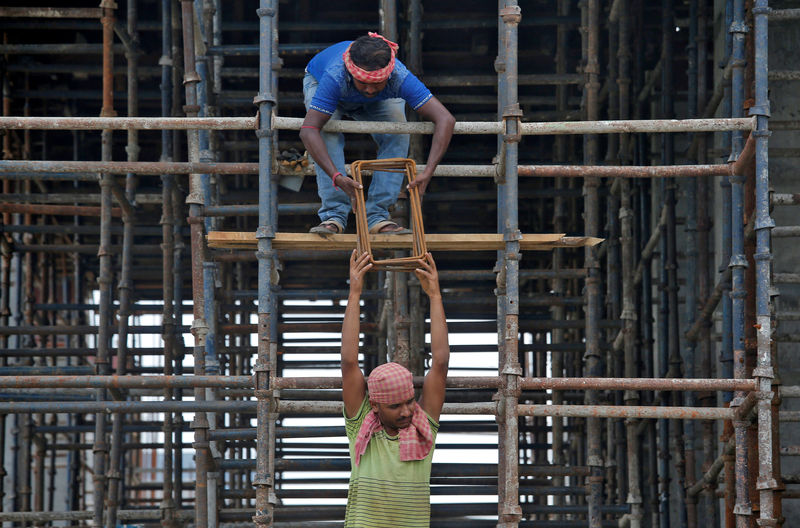 By Nupur Anand and Swati Bhat

MUMBAI (Reuters) – India might have thought the worst of a bad loans crisis was past, but a severe cash crunch in the real estate industry could augur fresh strife for its banks.

A slump in the residential property market is leaving many builders struggling to repay loans to shadow lenders – housing finance firms outside the regular banking sector that account for over half of the loans to developers.

With about $10 billion of development loans coming up for repayment in the first half of 2020, according to Fitch Rating’s Indian division, the fallout could spread to mainstream banks that have lent money to the shadow lenders or invested in their bonds.

Indian financial authorities, including the central bank and government, have said this year that the banking sector’s bad loans – totaling more than $150 billion – are on the decline for the first time in four years after ballooning during a debt crisis.

But the number of property developers falling into bankruptcy has doubled during the past nine months, piling pressure on non-banking finance companies (NBFCs), commonly known as shadow lenders.

Potential implosions of these NBFCs could expose banks, according to 12 banking and real estate sources.

A senior banking industry official, declining to be named due to the sensitivity of the matter, said banks would be affected by the property cash crunch in three ways: their lending to NBFCs, their own direct exposure to developers and also individuals who do not repay mortgages.

“It will be a triple-whammy,” he said.

While the Indian banking system could be hit by billions of dollars of additional soured debt, the cash crunch in the housing market has levied a toll in human misery.

Retired Squadron Leader Krishan Mitroo has paid 90% of the cost of his house in Noida, northern India, to developer Jaypee, and the property was supposed to be handed over five years ago. However, Jaypee was forced to delay the project and went into insolvency in 2017.

“The project has been stuck and there is no progress at all. Even the bankruptcy court has not been able to resolve the issue so far, it is just hanging in thin air,” Mitroo said. He did not say how much money he had paid, but properties in that project range from about $56,000 to $140,000.

Several such projects are stuck across the country and buyers are waiting for new developers to take interest and complete them with the hope that their hard-earned money, which has been stuck for years, won’t be lost forever.

The property sector has been battling a downturn for the last 3-4 years. Things have now, however, hit a critical point due to a liquidity crunch hitting shadow banks that are big lenders to both developers and property buyers.

As of June 30, 421 realtors were under the corporate insolvency resolution process (CIRP), up from 209 on Sept. 30 last year, data from the Insolvency and Bankruptcy Board of India shows.

Dewan and Altico did not respond to requests for comment.

Shadow lenders will be highly exposed when loans worth roughly 700 billion rupees come up for repayment in the first half of 2020, as many builders may struggle to repay, Fitch’s India Ratings said last month.

“The number of stressed assets in real estate are huge,” said Rohit Poddar, managing director at Poddar Developers. “The stress now is just the start, only the mid-sized to large developers will survive, others will die.”

If three-quarters of the high-risk category of outstanding real estate loans is not repaid, that could lead to additional bad debt of $15 billion on banks’ books in the next few years, according to confidential research conducted by one of India’s leading real estate consultancies for an international financial client, and provided to Reuters.

The Nifty Bank index (), which surged in late September after the government moved to slash corporate tax rates, gave up more than half those gains as of Friday. Concerns about real estate loans were one factor, according to analysts, but the fall was also driven by low growth in the economy and the overall worsening asset quality of certain lenders.

Banks’ gross non-performing assets fell to 9.3% of total loans as of March, from 11.5% a year earlier, according to the Reserve Bank of India (RBI).

The improvement was bigger than the RBI had expected, having forecast a drop to 10.3% by March and saying last December the ratio had fallen for the first time since 2015. The central bank said in June it expected bad loans to continue to fall in the current financial year, both the ratio and absolute sum.

But India still has the highest bad-loan ratio among major economies; by comparison Italy, which has endured a major banking crisis, had a ratio of 9% at the end of last year.

The four banks did not respond to requests for comment on potential difficulties arising from the real-estate exposure covered in the Moody’s report.

The chief financial officer of a large public-sector bank said the problems emerging in real estate loan repayments were a major cause of worry.

It is unclear what individual banks will do to address the problem. State-owned banks, which dominate the sector, have already received tens of billions of dollars from the government in recent years to shore up their finances.

International banks have a very small presence in the Indian market.

Indian banks’ bad debt pile ballooned as a result of out-of-control lending in 2006-11 when the economy grew rapidly, and beyond that. They under-reported their bad loans for years until they were forced by the central bank to recognize and address the issue in 2015.

RBI Governor Shaktikanta Das touched on the real estate issue this month, saying the central bank would be looking at the sector as part of its six-monthly report on the stability of the financial system. The next report is due to be released in December.

The RBI declined to make any further comment on banks’ exposure to bad real estate loans.

A rebound in the real estate market could alter the situation, but the outlook is looking increasingly bleak.

Several industry sources said builders were struggling to offload properties, even though they are ready to offer buyers up to 25% discounts on listed rates. The situation now is so severe that real estate inventories across India are at an all-time high of nearly four years and property prices have not risen in most parts of the country in the last 4-5 years.

Projects worth 1.8 trillion rupees ($25 billion) are stalled across India, according to property consultancy firm Anarock.

As developers go to the wall, more than half a million direct jobs may be lost in the coming months, the National Real Estate Development Council said. The number of indirect job losses from related industries like cement and steel may be even higher.

Slowing sales are piling on the pain, with buyers staying away because they increasingly can’t afford properties.

The house price-to-income ratio, which measures the cost of housing versus the change in income levels, rose from 56.1 in March 2015 to 61.5 in March 2019, indicating home purchases have become less affordable.

While consumers are staying away, investors are also wary of residential purchases due to low rental yields and meager-to-negative capital appreciation.

As the sector gets stressed further, repayments to lenders are likely to get further hit and banks will be increasingly unwilling to lend to property financiers and developers.

Pankaj Kapoor, chief executive of real estate consultancy firm Liases Foras, described the cash crunch in the sector as a “bloodbath” that would deteriorate further.

“This situation is likely to continue for another two years, which means builders may have to offer more discounts.”