Edwin Lefevre’s classic tome, “Reminiscences of a Stock Operator,” chronicles the career of Jesse Livermore, an infamous trader from the early 20th century. The book is often cited by traders and investors alike for the many lessons gleaned from Livermore’s stock market trials–a mixed series of successes and failures. While his exploits may impart some teachable moments, they often overwhelm the larger message, which can best be summarized through the following quote from the book: “There is nothing like losing all you have in the world for teaching you what not to do.”

Livermore apparently never took his own advice. His speculations made and lost several fortunes over the course of a career that spanned decades. If there’s one lesson that investors should take away from his story, it is that trading and speculation are risky to one’s wealth. Really risky. But Livermore’s experience, and others like it, haven’t stopped us from trying.

Cash flows for mutual funds and exchange-traded funds appear to confirm that investors are still engaged in bad-for-their-wealth behavior–moving in and out of funds at the wrong time. While there is a smorgasbord of strategies available to examine, the detrimental impact of timing one’s exposure to a given asset is particularly noticeable among funds that hedge their currency risk.

The primary objective of currency-hedged strategies is to eliminate currency risk from their foreign stock or bond exposures–the additional volatility that comes from changes in foreign-exchange rates. For long-term investors this is a reasonable strategy, as currency risk typically isn’t compensated. But a closer look at currency-hedged funds shows that these strategies hang an enticing carrot in front of those willing to speculate. And investors, collectively, haven’t been able to time currency fluctuations using these funds.

The Nature of Foreign-Exchange Risk
The volatility of foreign stocks (as measured by standard deviation) has two sources: the first being the volatility of stocks denominated in their local currency, and the second stemming from changes in the foreign-exchange rate between a stock’s home currency and an investor’s local currency. Strategies that hedge currency risk attempt to eliminate this second source of volatility. Theoretically, currency movements tend to be cyclical. Therefore, they can add to the long-term volatility of foreign investments without providing any compensation to investors for assuming this risk. A hedged strategy can all but eliminate this additional risk without affecting long-term returns.

Currency hedging can be effective, but it requires investors stay put for a long time in order to reap the benefit. Potential concerns arise over shorter stretches, as the intentional elimination of foreign-exchange risk can drive differences in performance between hedged and unhedged strategies.

Hedging is accomplished by locking in a predetermined exchange rate through a forward contract, with hedged strategies benefiting from this activity when the U.S. dollar appreciates relative to a foreign currency. As an example, the U.S. dollar appreciated against the euro in 2016, causing the returns of the MSCI EMU 100% Hedged to USD Index to exceed those of the unhedged index by 4.7% that year. However, hedging causes performance to lag an unhedged portfolio when exchange rates go the other way. In 2017, the U.S. dollar depreciated relative to the euro. Consequently, the MSCI EMU 100% Hedged to USD Index underperformed its unhedged counterpart by 13.4% over those 12 months. To summarize: Hedging currency risk can cause returns to deviate from a comparable unhedged portfolio over shorter time frames, but over the long run the impact tends to wash out.

There are signs that investors attempt to do this, but little evidence that they can pull it off successfully. In Exhibit 1, I show monthly net cash flow data for  WisdomTree Europe Hedged Equity ETF (HEDJ) along with the U.S. dollar-euro exchange rate. The fund experienced net inflows as the U.S. dollar appreciated against the euro from early 2014 through early 2015, peaking near the end of that appreciation cycle. But as the exchange rate settled and reversed course, money began flowing in the opposite direction. From January 2010 through April 2019, the fund returned 7.8% annually. Unfortunately, after accounting for monthly cash flows, the fund’s annualized internal rate of return landed at negative 2.9%. Poor timing collectively cost investors more than 10% per year. 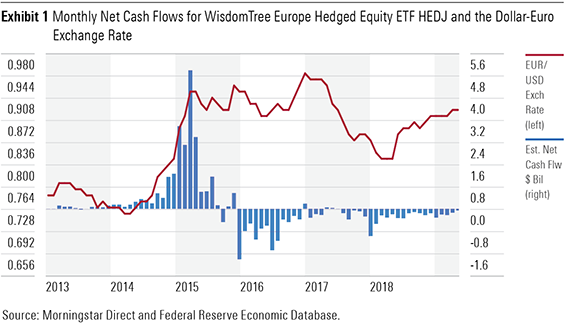 Another currency-hedged fund,  WisdomTree Japan Hedged Equity ETF (DXJ), has also experienced cash flows that appear to have been driven by investors trying to time movements in foreign-exchange rates. The pattern in Exhibit 2 shows net inflows occurring as the U.S. dollar appreciates relative to the yen, and outflows appearing as the dollar declines. 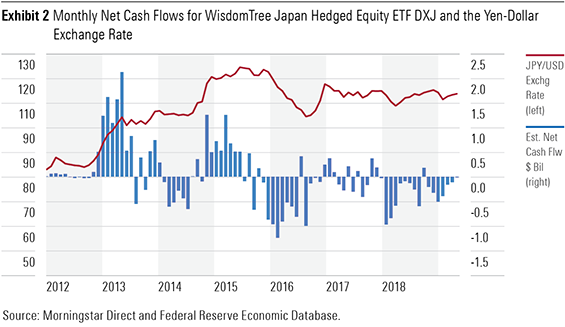 Consequently, the returns for DXJ are also symptomatic of the behavior gap, but the disparity isn’t as large as with HEDJ. As you can see in Exhibit 3, DXJ’s internal rate of return lagged its total return by 2.2% annually from July 2006 through April 2019. Other currency-hedged funds exist, such as iShares’ suite of currency-hedged ETFs. But these funds are relatively new, while HEDJ and DXJ have substantially longer track records. Therefore, they provide the best opportunity to assess just how well investors have fared with these funds.

It’s important to emphasize that currency-hedged funds aren’t bad funds, as they can be an effective means to reduce uncompensated volatility. But evidence suggests that they aren’t being used appropriately. In evaluating these funds, we remain indifferent to currency hedging, assigning the same rating to comparable hedged and unhedged portfolios. Exhibit 4 summarizes the Morningstar Analyst Ratings for six iShares foreign-stock funds and demonstrates our even-handed perspective of currency hedging.  IShares MSCI EAFE ETF (EFA) and  iShares Currency Hedged MSCI EAFE ETF (HEFA) both receive Morningstar Analyst Ratings of Bronze–consistent with other funds tracking this benchmark. Exchange-traded funds that track Japan and eurozone indexes receive Neutral ratings as their stock portfolios aren’t sufficiently broad to capture the full opportunity set that active managers in their respective categories can pull from. 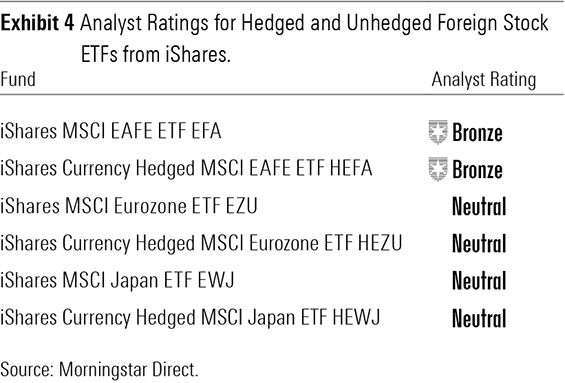 Daniel Sotiroff does not own shares in any of the securities mentioned above. Find out about Morningstar’s editorial policies.