Astronauts on the Moon found themselves hopping around, rather than simply walking. Switzerland’s SpaceBok planetary exploration robot has followed their example, launching all four legs off the ground during tests at ESA’s technical heart.

SpaceBok is a quadruped robot designed and built by a Swiss student team from ETH Zurich and ZHAW Zurich. It is currently being tested using robotic facilities at ESA’s ESTEC technical centre in the Netherlands. 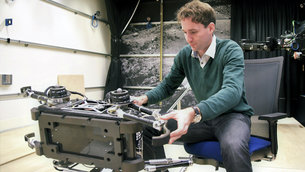 Work is proceeding under the leadership of PhD student Hendrik Kolvenbach from ETH Zurich’s Robotic Systems Lab, currently based at ESTEC. The robot is being used to investigate the potential of ‘dynamic walking’ to get around in low gravity environments.

Hendrik explains: “Instead of static walking, where at least three legs stay on the ground at all times, dynamic walking allows for gaits with full flight phases during which all legs stay off the ground. Animals make use of dynamic gaits due to their efficiency, but until recently, the computational power and algorithms required for control made it challenging to realise them on robots.

“For the lower gravity environments of the Moon, Mars or asteroids, jumping off the ground like this turns out to be a very efficient way to get around.” 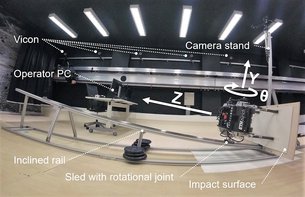 “Astronauts moving in the one-sixth gravity of the Moon adopted jumping instinctively. SpaceBok could potentially go up to 2 m high in lunar gravity, although such a height poses new challenges. Once it comes off the ground the legged robot needs to stabilise itself to come down again safely – it’s basically behaving like a mini-spacecraft at this point,” says team member Alexander Dietsche.

“So what we’ve done is harness one of the methods a conventional satellite uses to control its orientation, called a reaction wheel. It can be accelerated and decelerated to trigger an equal and opposite reaction in SpaceBok itself,” explains team member Philip Arm. 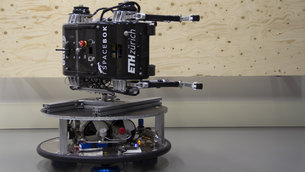 “Additionally, SpaceBok’s legs incorporate springs to store energy during landing and release it at take-off, significantly reducing the energy needed to achieve those jumps,” adds another team member, Benjamin Sun.

The team is slowly increasing the height of the robot’s repetitive jumps, up to 1.3 m in simulated lunar gravity conditions so far.

Test rigs have been set up to simulate various gravity environments, mimicking not only lunar conditions but also the very low gravities of asteroids. The lower the gravity the longer the flight phase can be for each robot jump, but effective control is needed for both take-off and landing.

To simulate the vanishingly low gravity of asteroids, the SpaceBok team made use of the flattest floor in the Netherlands – a 4.8 x 9 m epoxy floor smoothed to an overall flatness within 0.8 mm, called the Orbital Robotics Bench for Integrated Technology (ORBIT), part of ESA’s Orbital Robotics and Guidance Navigation and Control Laboratory.

SpaceBok was placed on its side, then attached to a free-floating platform to reproduce zero-G conditions in two dimensions. When jumping off a wall its reaction wheel allowed it to twirl around mid-jump, letting it land feet first again on the other side of the chamber – as if it was jumping along a scaled-down single low-gravity surface.

Hendrik added: “The testing went sufficiently well that we even used SpaceBok to play a live-action game of Pong, the video game classic.” 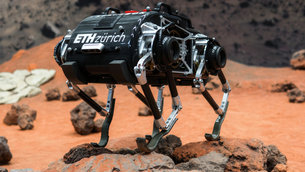 Testing will continue in more realistic conditions, with jumps made over obstacles, hilly terrain, and realistic soil, eventually moving out of doors.