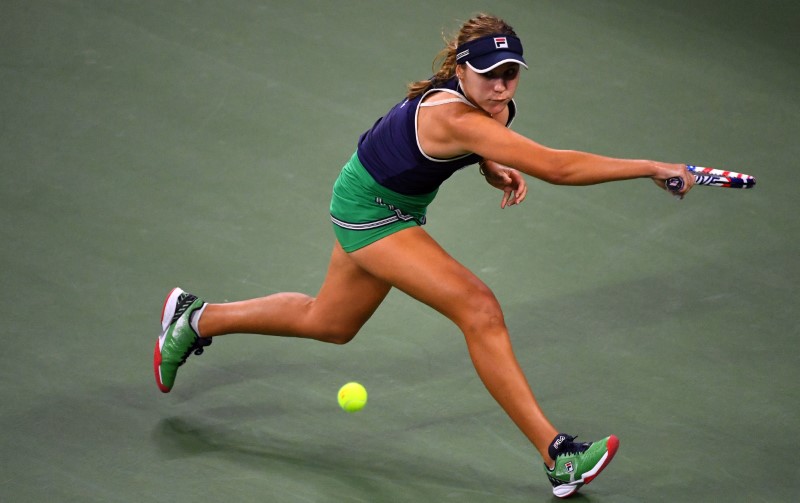 NEW YORK (Reuters) – Second seed Sofia Kenin overcame a sluggish start to surge past Tunisian Ons Jabeur 7-6(4) 6-3 on Saturday and move into the fourth round of the U.S. Open for the first time.

Jabeur, ranked 31 in the world, broke to take a 4-2 lead in the opening set as Kenin struggled to control her serve, but the American immediately responded with a break of her own before grabbing the early advantage in the contest via a tiebreak.

Kenin, who beat Jabeur en route to her Australian Open title earlier this year and came into the clash at Louis Armstrong Stadium with a 4-1 record over her, switched gears at the start of the second set.

Playing superb tennis from the baseline, she went 2-0 up before Jabeur broke back, but the 21-year-old raised her game once again and held firm to close out the win.

Jabeur hit 35 winners to Kenin’s 14 but also made 32 unforced errors to the American’s 23.

Kenin, who said she had been feeling some pressure after her Melbourne triumph, had lost in straight sets in her only warm-up event before the U.S. Open.

“… After Australia it (pressure) obviously got to me in a way but I regrouped… and I feel like I’m just playing better,” Kenin said in a courtside interview.

“But it’s good to have this pressure … it means you’re the favourite, people look up to you so. Pressure is a privilege.”

Up next for Kenin is Belgian Elise Mertens, who pushed her to three sets in their previous meeting in Wuhan last year.

“… It was a dramatic match. It was close and I won by like three points in the third-set tiebreak so it’s going to be tough… she’s got a big serve, big game,” Kenin added.

“But I’m playing well, I had a great match today and I’m going to rest up as I’m cramping.”