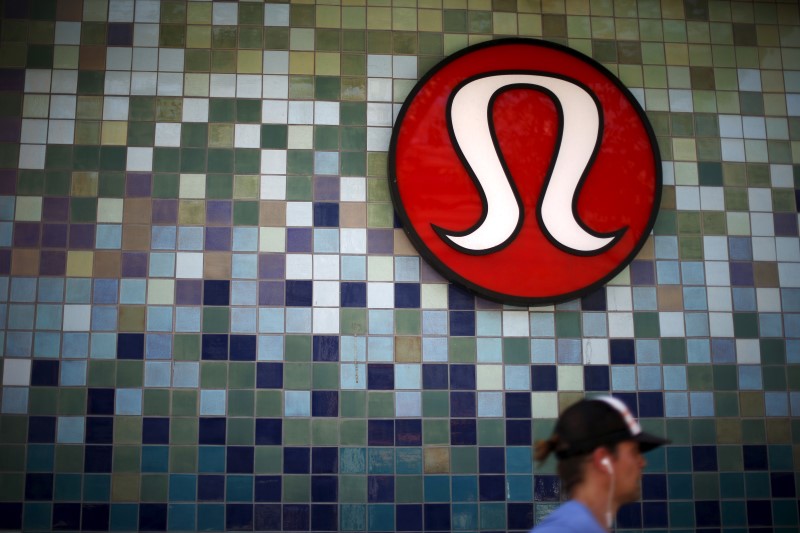 By Liz Moyer and Christiana Sciaudone

Investing.com — Lululemon’s been hogging the spotlight, and Gap’s been the downward dog for a while now. It’s time to turn the tables.

Investing.com’s Liz Moyer argues the bull case for Lululemon Athletica Inc (NASDAQ:), while Christiana Sciaudone explains why Gap Inc (NYSE:), and its popular Athleta brand, are the ones to beat. This is .

Comfortable clothing and personal workout equipment for the home are two pandemic trends that bode well for Lululemon’s prospects, and Wall Street agrees.

Analysts have been raising their price targets in recent days as Lululemon’s earnings release approaches on Tuesday. The consensus estimate tracked by Investing.com is looking for per-share profit of 52 cents on sales of $827 million but some analysts have said they expect an upside surprise. During the same quarter last year, the company had profit of 96 cents a share.

Popular with young women attracted to its $100+ leggings and luxury branding, Lululemon has become the undisputed leader of specialty brands.

Shares are up 54% this year and trading near all-time highs, though they gave back somewhat on Friday amid a broad market rout.

Even Citigroup (NYSE:), which downgraded Lulu last week on valuation concerns, admits Lulu is the mostly highly valued specialty brand ever, with an enterprise value of nearly $50 billion. That’s more than twice the previously highest-value brand, Victoria’s Secret, in its heyday a few years ago. LULU has a rich price-to-earnings ratio of 81 and a return on equity of 36%.

At around $360, Citi questions whether there is still room to climb, but other analysts see  it differently. Needham analyst Rick Patel raised his price target to $430. “We believe LUL is one of the best-positioned companies in the current environment,” he wrote in a note, pointing out the success of other active apparel companies during the second quarter. “We think that LULU’s strong brand and differentiated products position it well to capture demand and gain market share with many consumers at home.”

Stifel also recently raised its price target to $445, which implies a 23% upside from the current price.

Analysts at Piper Sandler checked out traffic at Lulu stores in multiple locations and report long-lines at both full price and outlet locations in Vail, Colorado, Austin, Texas, and Houston.

Lulu’s $500 million deal to acquire at-home fitness service The Mirror as a major source of growth and diversification for the company. The acquisition was complete in July and is expected to add $10 million to fiscal second quarter sales, according to BTIG.

It is this digital channel that analysts see as Lulu’s biggest source of growth. The Mirror is a streaming workout offering people access from home through a $1,495 wall-mounted machine, similar to the success of exercise class streaming service and stationary bike Peloton (NASDAQ:).

With many people reluctant to return to gyms or other indoor exercise spaces, at-home offerings like Mirror and Peloton have gained popularity. Wedbush writes in a recent note, “We believe the acquisition of Mirror provides LULU a unique opportunity to further connect with its customers without the limitations of physical locations.”

Since the deal was announced in June, Mirror’s streaming downloads have surged to 70,000 from 52,000. The monthly subscription is $39. Piper Sandler (NYSE:) reckons if Lulu can sign up just 5% of its customer base (7 million people), it could support $700 million of revenue over time.

“We believe it could add $175 million in sales in the next 12 months,” Piper said in a recent note. “We see substantial long-term potential to convert LULU customers to buy Mirror over time.”

Last quarter, Lululemon disappointed, missing estimates when it reported sales of $652 million. That was down 17% from a year earlier. Earnings per share were 22 cents, compared to 74 cents a year earlier. Yes, Covid, etc. But, take a look at Athleta.

Gap beat expectations last quarter, reporting sales of $3.28 billion. That was down 18% compared to a year earlier and couldn’t prevent the troubled clothier from losing 17 cents a share, down from earnings per share of 63 cents a year earlier. That said, the clear star of the Gap show is athleisure brand, Athleta, which reported sales growth of 6% for the quarter. And while that represents 8% of revenue for the company, or $262.4 million, there’s plenty of opportunity to increase that total.

The athleisure market is expected to show compound annual growth rate of 6.7% to reach $257.1 billion by 2026, according to a ReportLinker market research report.

Couple the ever-expanding market with the fact that many analysts believe Athleta to be undervalued relative to Lululemon and its appeal as a prime candidate for an acquisition or spinoff — as Gordon Haskett analyst Dan Bilson wrote in a note last month according to CNBC — and the underdog isn’t looking too shabby.

“Obviously nobody is going to make the case Athleta is worth one-quarter of LULU, or $12.5bn, but given what has happened with LULU of late, it doesn’t require much imagination to come up with a big number for Athleta and just as importantly, one that is rising,” Bilson said.

Citi valued Athleta at $3.6 billion when it upgraded GPS to buy from neutral last month, also citing the untapped potential of Athleta, The Street reported.

Karen Finerman of Metropolitan Capital Advisors loves Lululemon, and even she acknowledged there’s a problem: LULU has gone parabolic and it trades like the company is working on a vaccine, she said on CNBC

In 2013, the HuffPost reported that the company exiled larger clothing as part of its strategy to market its brand as the look of choice for the stylishly fitness-conscious. The same year, the Canadian retailer was forced to recall their $98 Luon pants because of complaints the material was too see-through. Founder Chip Wilson, speaking to Bloomberg TV at the time, infamously said: “Frankly some women’s bodies just don’t actually work for it.” In other words, if you’re not skinny, don’t bother. It took Wilson two years to apologize for the gaffe and resign from the board of the company.

Athleta, meanwhile, displays models that are large, small, young, old and of all colors. Women see themselves reflected in the brand. You’d be hard-pressed to find much diversity on the Lululemon website, and that’s in keeping with their strategy.

It’s also a bit cheaper to buy Athleta than Lululemon (pants sell for somewhere in the $79 range versus Lululemon’s $97 range), but perhaps more importantly is the return policy. Athleta’s is: Give-it-a-workout guarantee. Work it out. If it doesn’t perform, return it. By when do you have to return an item? Anytime. Compare that to Lululemon’s more restrictive policy: All merchandise must be unwashed and unworn with the original tags attached, and returned within 30 days of delivery.

Topping it off, Athleta offers a credit card with rewards to be spent back in Athleta stores. Lululemon has no such offering.

So, which will you be wearing?