FC Porto left-back Alex Telles is close to a switch to Manchester United, who are expected to make a formal bid in the coming days after missing out on Real Madrid’s Sergio Reguilon.

Portuguese outlet A Bola claims that Telles ‘is back in Manchester United’s plans’ and that ‘United’s doors are wide open’ to the 27-year-old after Spurs clinched the Reguilon deal yesterday.

‘Pini Zahavi is the Brazilian international’s agent and the intermediary in a deal that could result in a fee of €20 million [£18.5],’ the outlet reports. 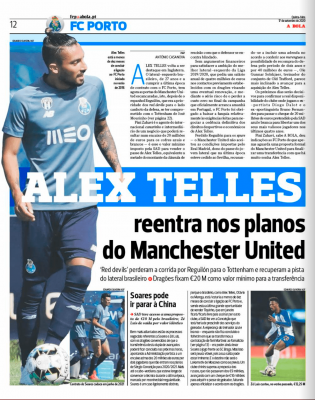 ‘This is the minimum value that FC Porto will accept for Alex Telles and is the equivalent of half his release clause of €40 million [£37].’

Porto are unable to meet the annual salary of €4 million that Telles is reportedly demanding to sign a new contract – the equivalent of £71,000 per week. They therefore need to cash in now to avoid losing him for nothing at the end of his current deal in 10 months’ time.

‘The next few days will be crucial in finding out the true intentions [of United] in paying the €20 million needed to secure one of Porto’s most valuable players of the last four years.’

‘Pini Zahavi … told FC Porto that he is just waiting for a formal offer from United to complete what will be a dream move for Alex Telles.’

Telles, who scored 13 goals and provided 12 assists for Porto last season, is a similar player to Reguilon – a very attack-minded and extremely talented left-back. Many would argue that he represents better value than the Spaniard at two-thirds of the price, with no buy-back clauses involved.

Manchester United’s new star Donny van de Beek will be the 13th Dutch national to play for the senior side. But how much do you know about the other 12? Take our quiz below to find out.