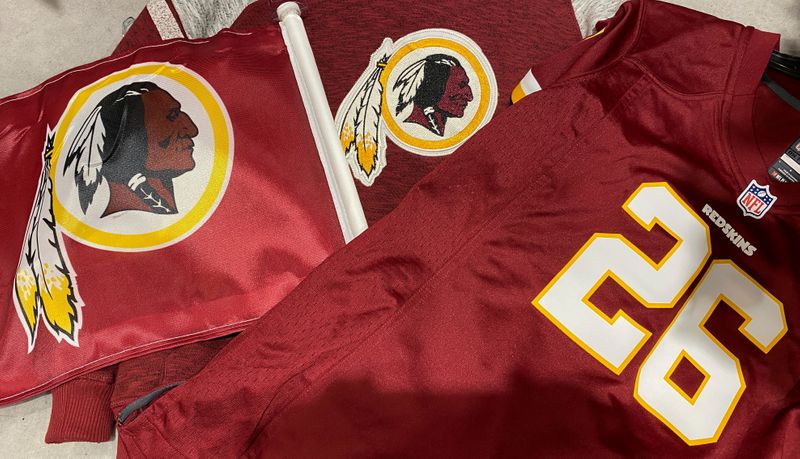 © Reuters. FILE PHOTO: Washington Redskins attire for sale at a store in Virginia

(Reuters) – The U.S. National Football League’s Washington team announced on Monday it will retire its Redskins name and logo, which it has used since 1933 but which has long been criticized as racist by Native American rights groups.

Team owner Dan Snyder, who bought the franchise in 1999, had previously said he would never change the name but softened his stance after FedEx Corp (N:), which owns the naming rights to the team’s suburban stadium in Landover, Maryland, urged the NFL club to rebrand.

The team said on July 3 it would conduct a thorough review of the club’s name.

“Today, we are announcing we will be retiring the Redskins name and logo upon completion of this review,” the team said in a statement.

The team did not provide a timeline for when the review would be completed. Its statement did not specify a reason for the name change.

Critics have ramped up pressure on the team to change its name, which is widely seen as a racial slur against Native Americans, amid the nationwide reckoning on racism and police brutality triggered by the May 25 death of a Black man named George Floyd in police custody in Minneapolis.

In June, a group of more than 80 socially minded investment firms, collectively with more than $620 billion in assets under management, urged FedEx, Nike Inc (N:) and PepsiCo Inc (O:) to terminate relationships with the team unless it changed its name.

PepsiCo and Nike both followed FedEx’s lead and said they welcomed the call for a review of the team’s name.

White House press secretary Kayleigh McEnany said at a news briefing that she had not yet spoken with U.S. President Donald Trump about the team’s decision but reiterated comments he made recently in which he said the name stands for “strength.”

“Last week, his tweet made it clear that these teams name their teams out of strength, not weakness,” said McEnany.

“And he says that he believes the Native American community would be very angry at this and he does have polling to back him up,” she added, citing an old Washington Post poll that showed 90% of Native Americans were not offended by the name.

The National Congress of American Indians said in a statement on Monday: “We commend the Washington NFL team for eliminating a brand that disrespected, demeaned, and stereotyped all Native people, and we call on all other sports teams and corporate brands to retire all caricatures of Native Americans that they use as their mascots.”

The team that became the Washington Redskins was founded in 1932 as the Boston Braves. Its name was changed to the Redskins the following year and it moved to Washington in 1937. Many American professional and collegiate sports teams have nicknames on Native American themes.

Snyder and Ron Rivera, the team’s new head coach, “are working closely to develop a new name and design approach that will enhance the standing of our proud, tradition rich franchise and inspire our sponsors, fans and community for the next 100 years,” the team said.

The team has won three Super Bowls and is one of the NFL’s marquee franchises, ranked by Forbes last September as the league’s seventh most valuable franchise at $3.4 billion.

In June, a memorial to the team’s founding owner, George Preston Marshall, who fought against the racial integration of the NFL, was removed from RFK Stadium, the team’s former home in Washington.

The NFL did not immediately respond to a request for comment on the team’s announcement.

U.S. ban on China’s TikTok could cut it off from app stores, advertisers: White House document

Google turns Android phones into earthquake sensors; California to get alerts By Reuters