Manchester United head into Thursday’s Europa League game against Partizan Belgrade with less pressure on them than expected.

Sunday’s 1-1 draw with Liverpool surprised everybody given the form of both sides heading into the game, with United providing a performance which, at least, had pace and tactical acumen on show.

However, they face a different task against Partizan, whose game plan will be to challenge United’s apparent inability to break down teams employing a low block.

Here is the starting XI that we think United could use to circumvent their recent troubles in games such as these. 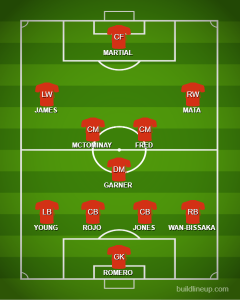 James Garner is on the cusp. The next off the production line. Mason Greenwood, Angel Gomes, Tahith Chong and Brandon Williams have all received proper run-outs this season, and Garner really should have been included by this point as well.

Ole Gunnar Solskjaer wants his team to move the ball quickly. To take risks. That, you suspect, is his idea for how to get past teams like Partizan, who will happily sit back and take a draw, or nick a 1-0 victory.

This is where Garner can come in. Neither Nemanja Matic nor Scott McTominay have the capacity to move the ball quickly and positively from the base of midfield, seemingly laying the platform for the 18-year-old to receive an opportunity.

Garner has demonstrated at youth level a superb eye for picking passes from deep, for caressing the ball rather than hitting it.

Against the two banks of four in Belgrade, this is where Garner could make a difference. Solskjaer needs to put his money where his mouth is and play him on Thursday.