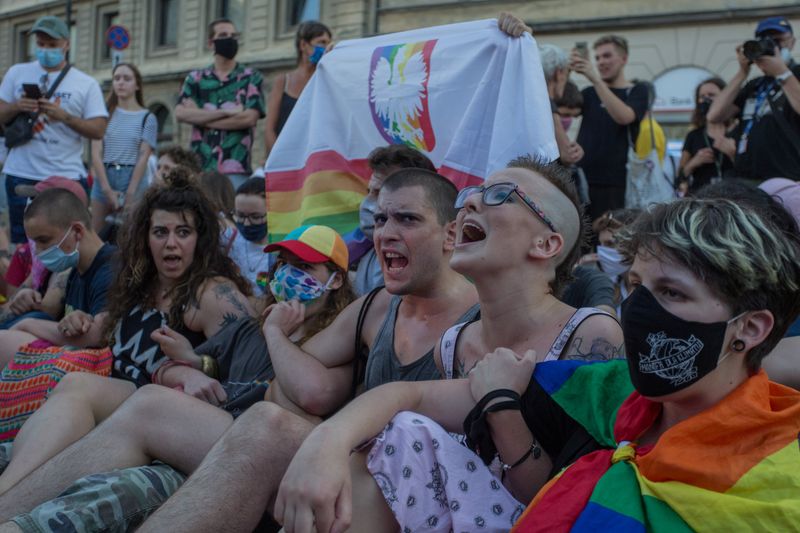 WARSAW (Reuters) – Hundreds of protesters surrounded a police van on Friday in central Warsaw to try to block it from driving away after officers detained an activist who hung LGBT flags on statues in the city last week.

The protesters shouted “Shame, disgrace!” before the police pushed the protesters away and the van sped off, a Reuters witness said. An ambulance arrived at the scene soon afterwards, but the nature of any injuries was not immediately clear.

Activists from anti-homophobia group “Stop Bzdurom” who claimed responsibility for the flag campaign said it was part of a fight in honour of LGBT rights, an issue thrust into the heart of public debate in Poland during last month’s presidential election.

Earlier this week, the activists, including the one detained on Friday, were held for around 40 hours in connection with the flag campaign before being freed, a police spokesman said.

But the spokesman said the decision to detain the activist, under which she would be held for two months pending further investigations, was not tied to the statue campaign but related to another incident.

A protest in solidarity with the activists and with LGBT people is being organised in Warsaw on Saturday.

Government figures from the ruling nationalist Law and Justice (PiS) party condemned the activists after the flag stunt, with some supporting their detention.

PiS has argued that LGBT rights are part of an invasive foreign ideology that undermines Polish values and the traditional family.

“This is the strong nation in all its glory. Why fight with exclusion and coronavirus when you can fight with the rainbow and human rights defenders. Shame!” tweeted Magda Biejat, a member of parliament allied with the opposition Left group.