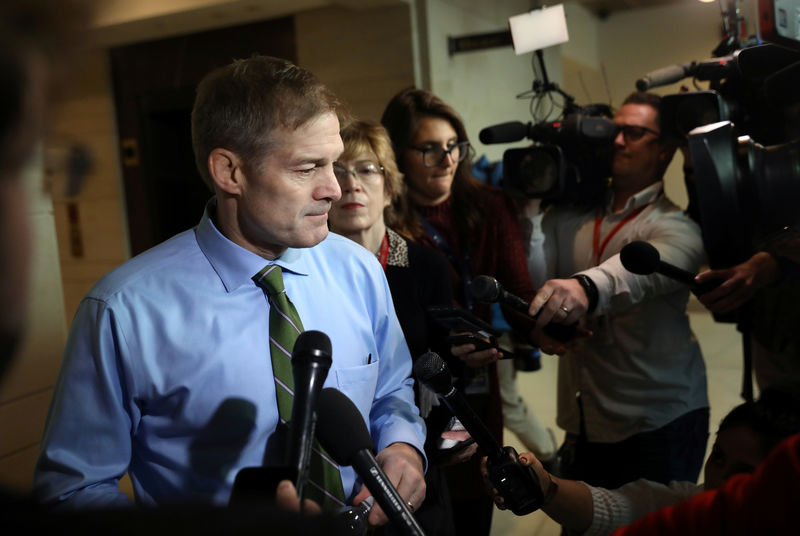 WASHINGTON (Reuters) – U.S. Republicans said Friday they are moving Representative Jim Jordan, one of President Donald Trump’s most tenacious defenders, onto the congressional committee that will hold public hearings next week on Trump’s possible impeachment.

Republicans are temporarily moving aside a current member of the panel to make space for the Ohio lawmaker on the House of Representatives Intelligence Committee, in an unusual move that heralded the seriousness of the situation for Trump and his party.

Republicans disparage the impeachment inquiry run by majority Democrats in the House as a bogus partisan show. But with public, televised hearings starting Wednesday, Republicans want someone in the arena who can mount a strong defense of Trump.

“Jim Jordan has been on the front lines in the fight for fairness and truth. His addition will ensure more accountability and transparency in this sham process,” House Republican Leader Kevin McCarthy said in a statement.

Jordan, a former assistant college wrestling coach and former leader of the conservative House Freedom Caucus, has already proven himself adept at backing Trump during the first part of the Democrats’ inquiry into whether the president should be removed from office over allegations that he abused his office for political gain in recent dealings with Ukraine.

In recent weeks Jordan has been a near-constant attendee at closed-door depositions of witnesses, talking frequently to reporters afterward and defending the president on television.

“I want to help the country see the truth here, that President Trump didn’t do anything wrong,” he said on Fox News earlier this week.

Jordan is the top Republican on the Oversight Committee, one of three panels that has conducted the inquiry. Only the Intelligence Committee will hold hearings in the public phase starting Wednesday.

He will temporarily replace Representative Rick Crawford, who has not attended many impeachment inquiry sessions.

“Rick has offered to step aside for this charade. When it is finished, Rick will rejoin the committee,” McCarthy said.

Trump has denied wrongdoing and accused Democrats of unfairly targeting him in hope of reversing his surprise victory in the 2016 presidential election.