Scottsdale, Ariz.—Samsung’s Galaxy Fold2 will be available Sept. 18, but honestly, I’m not even sure what to actually call the device. And I’m not alone. Even Samsung punted on a label, knighting the Fold2 a “category-defining foldable device.” And Microsoft, which is sort of in the same boat with the new Surface Duo, dubbed its upcoming hardware “a dual-screen mobile device.”

Notice they didn’t call them smartphones. Or tablets. Or even foldable phones. Which is smart. Because the Fold2 – or the Surface Duo, for that matter – is a package of all of those things that, as a consequence, won’t compare well against any one of those things.

The Fold2’s 6.2-inch exterior screen, for example, is smaller than you’ll find on today’s premium smartphones. Likewise, the 7.6-inch folded display pales in comparison to high-end tablets. It’s thicker and heavier than high-end 5G phones. It’s much larger than foldable phones like the Motorola Razr or Samsung’s Z Flip 5G, compact devices that unfold to familiar smartphone dimensions. And at $1,999, the Fold2 also costs a good deal more than any of them.

Still, Samsung’s new Galaxy Z Fold2 5G is a great device. It’s a polished product, a technical marvel and a shining example of, well, whatever you call a smartphone with a tablet tucked inside.

I used the original Fold for several months last year as my primary device, and have now been evaluating the Fold2 since Sept. 1. Here’s what I think: 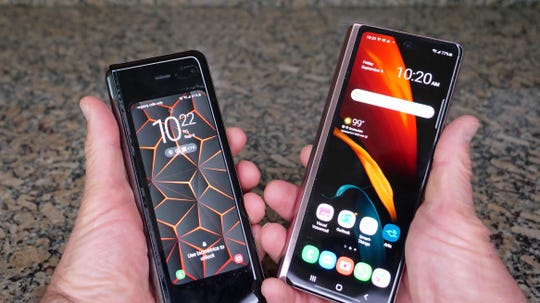 How Fold 2 compares to the original

The original was an impressive display of capability. But as a product, it was still pretty rough around the edges. It had more the look of a curiosity than a piece of executive jewelry, which should be the baseline in this price range.

The Fold2 scratches that itch. It is elegant and refined. And the concept is more fleshed out, with ooh-and-ah use cases that leverage the device’s uniqueness. Like the camera, for instance, which makes use of both displays for hands-free selfies, video chat and photography.

That wasn’t possible with the original Fold’s open-or-closed, two-position hinge. The new 180-degree hinge is more durable, holding in place at any angle. The Fold2’s screen is more durable as well, with a thicker protective layer.

Forget $1,000 smartphones: here are three great options for under $400 from Apple, Google and Samsung

It’s $2,000: Samsung hits a new record with the most expensive smartphone

Durability was the knock on the Fold since a few defective evaluation units forced a delay early last year. Though I did encounter some shortcomings on the Fold2, durability was not one of them. I found the device to be practically bulletproof.

I treated the Fold like I treat all my stuff, which is to say harshly. The first time I dropped it – that’s right, the first time – it plummeted about 5 feet, crashing onto the concrete floor by the customer service desk at Lowe’s. My heart sank. But the device was – and is – unscathed. The screen is still in great condition. Aside from the hinge, which could use some tightening, the original Fold is no worse for wear.

Probably the biggest shortcoming of the original Fold was the skimpy 4.6-inch external display. The Fold2’s 6.2-inch display has 35% more real estate. And like the big screen inside, it’s vibrant and beautiful. I find it much more suitable for what I call first-responder activities – like texting, answering calls and checking alerts – than I did with its anemic predecessor. That said, it’s still thinner than normal, and something Samsung engineers no doubt will be improving in subsequent years.

A premium device like this should also have the latest cellular technology, which for the past 15 months or so has been 5G. The Fold2 does. 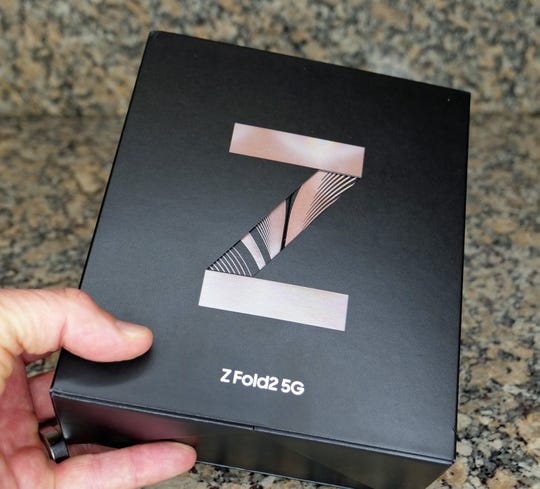 So who is the Fold2 actually for?

I don’t mean to be glib, but it’s ideal for anyone who wants a tablet folded inside a smartphone. When I traveled for work last year, I lightened my load by swapping out my tablet and smartphone for the Fold.

I found the Fold to be a great size for reading, social media and watching videos on planes. And while the Fold did weigh heavily in my gym shorts pocket, the larger display was just perfect for reading on the elliptical. Indeed, the Fold was flat-out the best reader I’ve ever used. Until the Fold2 came along, that is.

Lugging fewer devices is almost always better. And it’s nice having the capability of both phone and tablet in situations where I’d normally just have a phone. Like answering an important email at dinner. Even now that I’m not traveling, carrying two devices in one gives me a whole lot more capability in more situations, for both work and play. And I find myself reaching for the laptop a little less often.

Two-in-one would have been a great moniker for the category, had the PC industry not co-opted the term for laptops with detachable keyboards and 360-degree hinges. Likewise, phablet would have worked well, except it already describes big-and-tall smartphones.

For now, I guess, we’ll have to settle for a smartphone with a tablet tucked inside. But if that’s what you are looking for, know this: With the Fold2, you won’t be settling for anything.

USA TODAY columnist Mike Feibus is president and principal analyst of FeibusTech, a Scottsdale, Arizona, market research and consulting firm, and producer of the Privacy Now interview series on YouTube. Reach him at mikef@feibustech.com. Follow him on Twitter @MikeFeibus.