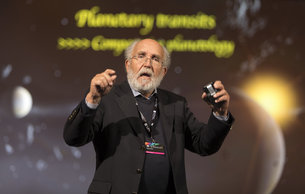 As part of the ESAC Science Seminar Programme, this week our invited speaker is Michel Mayor, professor emeritus at the University of Geneva, Switzerland, awarded earlier this week with the Nobel Prize in Physics 2019. He will give the seminar  ‘Exoplanets: Past, Present and Future’.

Together with Didier Queloz, Michel Mayor discovered 51 Pegasi b in 1995, the first extrasolar planet, orbiting the sun-like star 51 Pegasi. His team is responsible for finding more than 250 exoplanets. Michel Mayor is a principal investigator of the HARPS consortium planet search survey, which has discovered a growing population of superearths and Neptune-like small mass planets.
During the presentation, Michel Mayor will describe the evolution of the search for exoplanets in the last 25 years. In this period, the astronomical instrumentation has achieved a spectacular progress, which has revealed an impressive diversity, complexity and frequency of planetary systems. The research field has experimented a drastic change of paradigm about the frequency of planetary systems in the Milky Way as well as their formation mechanisms. Michel Mayor will also discuss a few recently developed instruments rich of future possibilities.

Michel Mayor (Lausanne, Switzerland; 1942) received his MSc in Physics from the University of Lausanne (1966) and a PhD in Astronomy from the Geneva Observatory (1971).  From 1971 to 1984, Mayor worked as a research associate at the Observatory of Geneva, which is home to the Astronomy Department of the University of Geneva. He became an associate professor at the university in 1984. In 1988, the University named him a full professor, a position he held until his retirement in 2007. Mayor was director of the Observatory of Geneva from 1998 to 2004. He has been professor emeritus at the University of Geneva since 2007.
With more than 700 scientific publications, Professor Mayor was awarded the Swiss Marcel Benoist Prize in recognition of his work and its significance for human life. In 2000 he was awarded the Balzan Prize and in 2004 he received the Albert Einstein Medal. In 2005, he was awarded the Shaw Prize in Astronomy.

In 2015 he was awarded the Gold Medal of the Royal Astronomical Society and in 2017 he received the Wolf Prize in Physics.  Earlier this week, on Tuesday 8 October 2019 he was awarded the 2019 Nobel Prize in Physics together with Didier Queloz for the first discovery of an exoplanet orbiting a solar-type star. The two Swiss astrophysicists shared the prize with James Peebles, honoured for the theoretical framework of cosmology used to investigate the Universe on its largest scales.