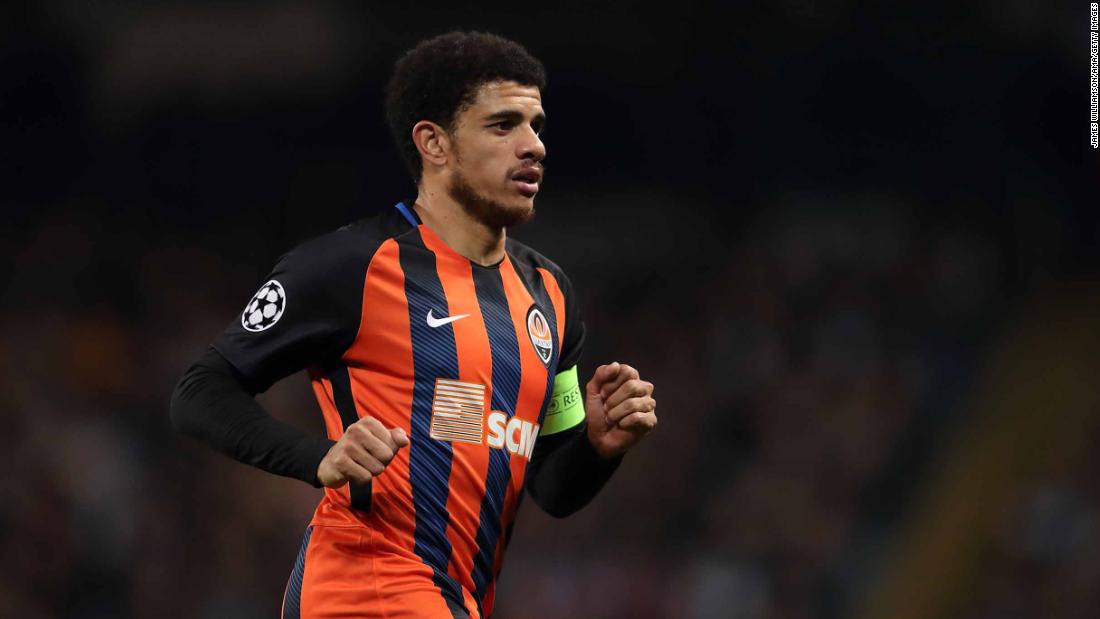 In the 74th minute of the home side’s 1-0 win, the Brazilian put his middle finger up at the section of visiting Dynamo supporters and kicked a ball in their direction.

Football Against Racism in Europe (FARE) group said Taison’s teammate Dentinho reported the racist abuse to the match referee, who subsequently activated step one and two of UEFA’s protocol by ordering a stadium announcement and then taking the players into the changing room.

Taison and Dentinho both left the field in tears.

When the players reemerged, the referee showed Taison a red card. Step three of UEFA’s protocol, abandoning the match, was not activated.

“I love my race, I fight for color, whatever I do is for us, for love,” Taison wrote on Instagram after the match. “I will never shut up in the face of such an inhuman and despicable act. My tears were of indignation, repudiation and helplessness, helplessness that I could do nothing at that moment!

“But we are taught early on to be strong and to fight! Fight for our rights and for equality! My role is to fight, to beat my chest, to lift my head and keep fighting always!In a racist society, it is not enough not to be racist, we must be anti-racist! Football needs more respect, the world needs more respect!

“Thank you all for the support messages! We follow the fight … no to racism.”

In a statement released after the match, Shakhtar said it “categorically opposes any manifestations and forms of racism, racial discrimination, xenophobia, and any related intolerance.”

“There can be no justification of those who insult other people because of their skin colour, religious, or political beliefs,” the club said. “This kind of behaviour is unacceptable in any civilized countries and football leagues.

“Such humiliating accidents cause pain and disappointment to the large football family of FC Shakhtar. We condemn this kind of behavior of the audience, we will always voice the support and protect our players. We are calling on football authorities and clubs to stop racism in the stadiums.”

Dynamo Kyiv said it is “ready to assist [the investigation] comprehensively and, if proven guilty, will take all possible steps to further isolate these individuals not only from football but also from society.”

The incident is one of a rapidly growing number this season that has placed scrutiny on European football governing body UEFA and the effectiveness of its anti-racism protocol.

Despite several high-profile cases of racist abuse in Serie A — including against Mario Balotelli last weekend — and one involving the England national team in Bulgaria, the third step of abandoning a match is yet to be enforced.

UEFA has been criticized for what many people believe are inadequate punishments for incidents of racist abuse, which have included partial stadium closures and paltry fines.

The governing body told CNN it is unable to take action due to it being a domestic incident and is the responsibility of Ukrainian football authorities to decide on potential punishments.

The Ukrainian Football Federation was not immediately available for comment.