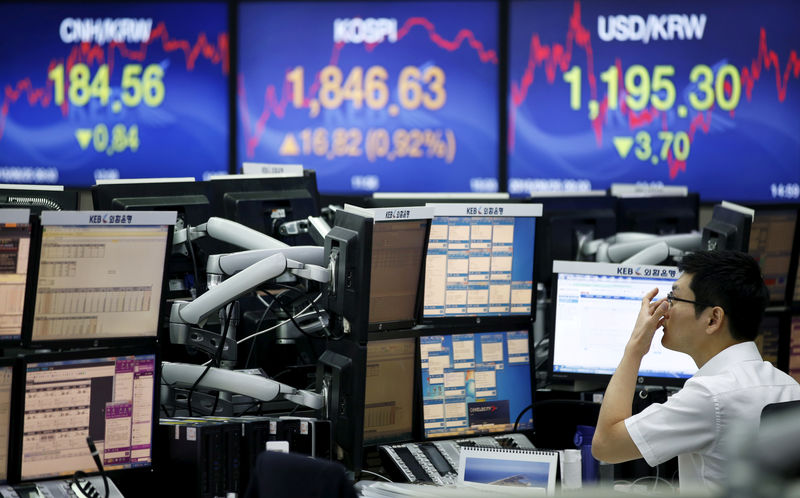 © Reuters. FILE PHOTO: A currency dealer works at a dealing room of a bank in Seoul

By Yena Park and Hideyuki Sano

SEOUL/TOKYO (Reuters) – South Korea’s exposure to a stressed global manufacturing supply chain has knocked its currency – Asia’s most risk sensitive – to over two-year lows as investors use it as a proxy to bet on the economic costs of a protracted U.S.-China trade war.

The won has dropped nearly 6% against the dollar this year, worse than some of its peers, hit also by broader concerns over global growth and growing views the Bank of Korea will soon have to cut rates to support the economy.

As trade tensions flared up between the world’s two largest economies last month and the threatened to fall past the key 7-per-dollar level, the won slid to near 1,200 per dollar, its lowest since January 2017.

“The won is like a proxy currency to not only global growth sentiment but one that’s also related to U.S.-China trade talks,” said Park Sang-hyun, chief economist at Hi Investment & Securities in Seoul.

“It won’t be easy to keep the dollar/won level of 1,250 should the U.S.-China spat intensify, with possibly additional tariffs, for example.”

The spiraling trade war between Washington and Beijing, which has gone beyond tariffs to company blacklists and travel restrictions, makes that scenario highly plausible.

U.S. President Donald Trump has said he expects to meet Chinese President Xi Jinping at the G20 leaders’ summit in Osaka later this month, after bilateral trade talks ended in a stalemate in May, but China has not confirmed any such meeting.

Trade war damage and a softening in global demand will make 2019 the worst year for trade since the financial crisis a decade ago, with only 0.2% growth, said economists at ING.

That’s rough on trade-dependent economies such as South Korea, whose currency has borne the brunt despite heavy verbal and dollar-supplying intervention by the authorities.

A policy source told Reuters the authorities weren’t trying to defend specific levels but said: “You can’t completely ignore where the rate stands when market players take a certain level as a particularly significant one.”

As was the case in 2015, the won has proven to be the most correlated and liquid proxy for the Chinese currency. Then, it fell nearly 15% in just over a year against the dollar during the turmoil around the yuan’s devaluation.

“Clearly the Korean won lends itself to trading because of its liquidity and because it’s so obviously linked to the supply chain,” said Claudio Piron, a strategist with BofAML in Singapore.

He expects the won will fall to the weaker side of 1,200 “if there is no trade deal and dollar/yuan goes above 7”.

Korea’s semiconductor exports in May plummeted 30% from a year earlier, the biggest fall since 2009, while its current account surplus – about 5% of GDP last year – shrunk.

Making matters worse, fund managers have been selling South Korean shares as they adjust for a rise in Chinese equity weightings in MSCI’s emerging markets index. May saw about 2.5 trillion won ($2.1 billion) of non-resident funds pulled out of Seoul’s main stock exchange.

As much as $3.5 billion of passive investment is expected to flow out of Korean shares in total as a result of the MSCI index adjustments this year, KB Securities in Seoul estimates.

One source of reprieve for Korean markets could be easier U.S. and Chinese monetary policy. In the longer term, markets will also bounce back if a Sino-U.S. trade deal is reached.

“Markets will likely conclude that they have over-reacted a bit to the headline on U.S.-China economic spats,” said Kenji Hashizume, a senior fund manager at Sumitomo Mitsui DS Investments in Hong Kong.

“It’s not like demand for 5G and IoT (internet of things) will completely disappear. Even if one company gets excluded from the market, that does not mean the end of the story,” he said.

Americas will be hardest hit by COVID-19 job losses :ILO By Reuters