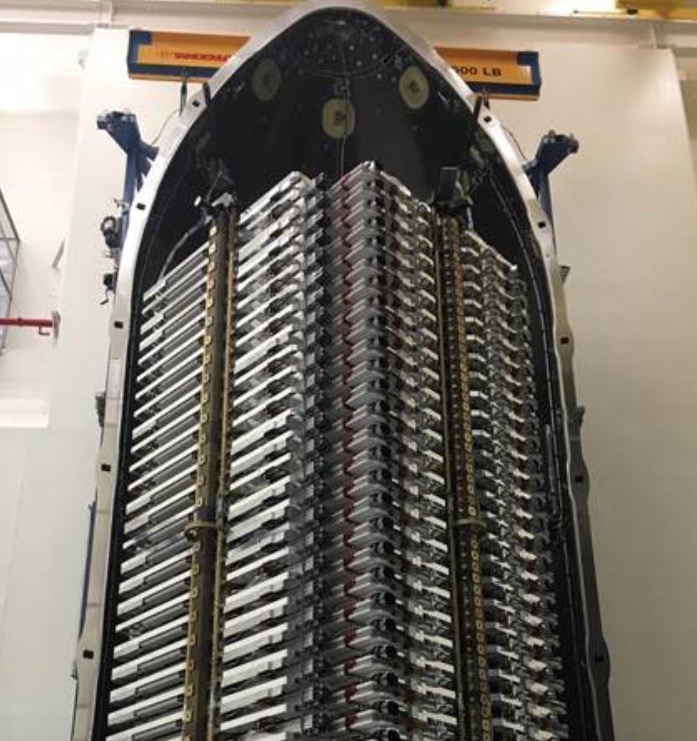 SpaceX is lofting a pioneering phalanx of internet satellites tonight (May 15), and you can watch the liftoff live.

A two-stage Falcon 9 rocket carrying the first 60 spacecraft in SpaceX’s “Starlink” megaconstellation is scheduled to launch tonight at 10:30 p.m. EDT (0230 GMT on May 16) from Florida’s Cape Canaveral Air Force Station. Watch it live here at Space.com courtesy of SpaceX, or directly via the spaceflight company.

The 60 tightly packed satellites nearly fill the Falcon 9’s payload fairing, as SpaceX founder and CEO Elon Musk showed in a photo posted on Twitter over the weekend. That same post included an image of Musk’s Tesla Roadster looking tiny inside its fairing ahead of its launch on the first test flight of SpaceX’s Falcon Heavy rocket back in February 2018. (The Falcon 9 and Falcon Heavy use fairings of the same size.)

Two weeks after that Falcon Heavy mission, SpaceX lofted two Starlink prototypes, dubbed Tintin A and Tintin B, as secondary payloads on a Falcon 9 flight. But the spacecraft going up tonight are “production-design” satellites, Musk said.

Tonight’s launch will be just the beginning for Starlink, if all goes according to plan. SpaceX aims to launch up to 12,000 satellites for the constellation, which is designed to deliver cheap internet access to people around the world.

Six additional launches of 60-satellite payloads will be required to provide “minor” coverage, and “moderate” coverage will be achieved by launching six more after that, Musk said in another tweet.

SpaceX isn’t the only company with internet-satellite dreams. For example, both OneWeb and Jeff Bezos’ Blue Origin plan to start building up megaconstellations of their own in the coming months and years.