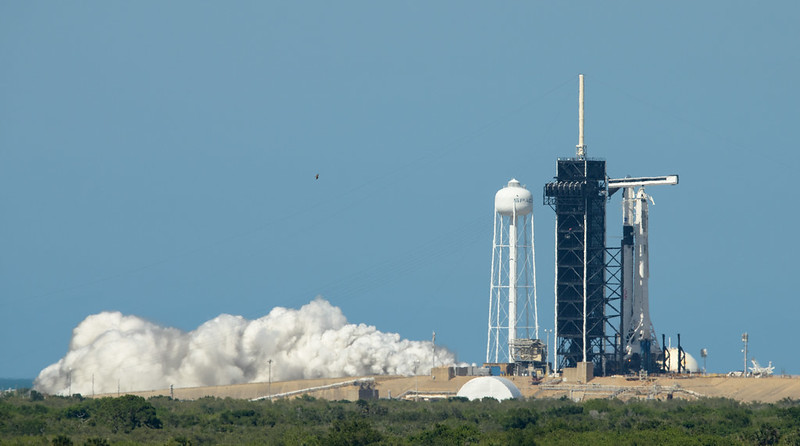 SpaceX just notched another milestone on the path to its first-ever crewed launch next week.

Elon Musk’s company is gearing up for the Wednesday (May 27) launch of the Demo-2 mission, which will send NASA astronauts Bob Behnken and Doug Hurley to the International Space Station (ISS) aboard a SpaceX Crew Dragon capsule.

This afternoon (May 22), the company performed a “static fire” test of the Falcon 9 rocket that will launch Demo-2, firing up the booster’s first-stage engines briefly on the pad at NASA’s Kennedy Space Center in Florida.

The static fire occurred just a few hours after NASA, ISS and SpaceX teams wrapped up a critical, two-day flight readiness review (FRR), which declared Demo-2 clear for its planned May 27 liftoff.

There are still a few boxes to check over the next few days, however. On Saturday (May 23), for example, mission teams will run through a “dry dress” exercise, which will simulate many of the activities that NASA and SpaceX will perform in the leadup to launch on Wednesday. Behnken and Hurley will suit up for the dry dress, agency officials said.

And on Monday (May 25) comes the final launch readiness review, which will incorporate analyses of the data from the static fire and the dry dress along with other information, NASA officials said.

Demo-2 is designed to fully validate Crew Dragon and Falcon 9 for crewed flight, clearing the way for operational astronaut-carrying missions. SpaceX holds a contract with NASA’s Commercial Crew Program to conduct six such flights (as does Boeing, which is developing a capsule called CST-100 Starliner).

Crew Dragon has reached the ISS once before, on the uncrewed Demo-1 mission in March 2019. But Demo-2 will be the first orbital human mission to launch from the United States since the final flight of NASA’s space shuttle program in July 2011. Since then, the space agency has relied on Russian Soyuz rockets and spacecraft to get its astronauts to and from the ISS.