The air we breathe

Air pollution is a global environmental health problem, especially for those living in urban areas. Not only does it negatively impact our ecosystems, it considerably affects our health. According to the World Health Organization (WHO), around 8 million premature deaths per year are linked to air pollution, more than double of previous estimates.

One of the pollutants with the strongest evidence of health effects is nitrogen dioxide. In the EU, the largest contributor to nitrogen dioxide emissions is the road transport sector, as well as pollution produced from industrial activities, and residential combustion.

According to the Air quality in Europe report published in 2018 by the European Environment Agency (EEA), nineteen of the EU Member States recorded nitrogen dioxide concentrations above the annual limit value. 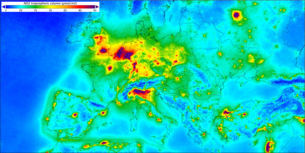 Not only is nitrogen dioxide damaging the ecosystem, it also causes significant health issues contributing to respiratory problems ranging from causing cardio-pulmonary ailments, to exacerbating asthma and even impacting cognitive abilities.

With air quality increasingly becoming a serious concern, the Copernicus Sentinel-5P satellite was launched in 2017 to map a multitude of air pollutants around the globe. With its state-of-the-art instrument, Tropomi, it is able to detect atmospheric gases to image air pollutants more accurately and at a higher spatial resolution than ever before from space.

Folkert Boersma, Associate Professor at Wageningen University and Research Scientist from the Royal Netherlands Meteorological Institute (KNMI), comments, “The spatial resolution of the satellite is so good, that we can pinpoint emissions in fine detail and also detect gradients of emissions in large cities.” 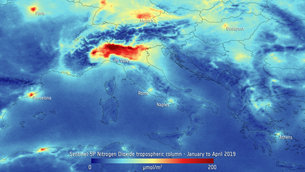 As part of the Living Planet Symposium School Lab taking place in Milan this week, ESA has given schools around the Lombardy and Milan area, the exciting opportunity to assemble and operate their own air monitoring stations. The Living Planet Symposium School Lab aims to make school students to discover the exciting science and technology behind Earth observation.

Based on a Rasperry Pi computer, each station is equipped with a set of sensors to measure different characteristics of ambient air. The stations measure nitrogen dioxide, carbon dioxide, carbon monoxide and particulate matter, as well as temperature and humidity. They also have a GPS receiver for positioning. Once the platform has Wi-Fi access, it automatically sends its measurements to an online map where they can be retrieved in real time.

Throughout the week, the results will be published on an interactive map, showcasing how both children and citizens can contribute in monitoring different air quality parameters, as well as gaining an insight regarding air pollution and how satellite missions can help monitor these issues.

Italy is among the top countries in Europe with the largest health impacts attributed to nitrogen dioxide exposure, as well as Germany, France, Spain and the United Kingdom. In northern Italy, the densely populated and heavily industrialised Po Valley area, makes it one of the areas with the dirtiest air in Europe.

We are changing our natural world faster than at any other time in history. Understanding the intricacies of how Earth works as a system and the impact that human activity is having on natural processes are huge environmental challenges. Satellites are vital for taking the pulse of our planet, delivering the information we need to understand and monitor our precious world, and for making decisions to safeguard our future. Earth observation data is also key to a myriad of practical applications to improve everyday life and to boost economies. This week we focus on the world’s biggest conference on Earth observation where thousands of scientists and data users discuss the latest results and look to the future of Earth observation.