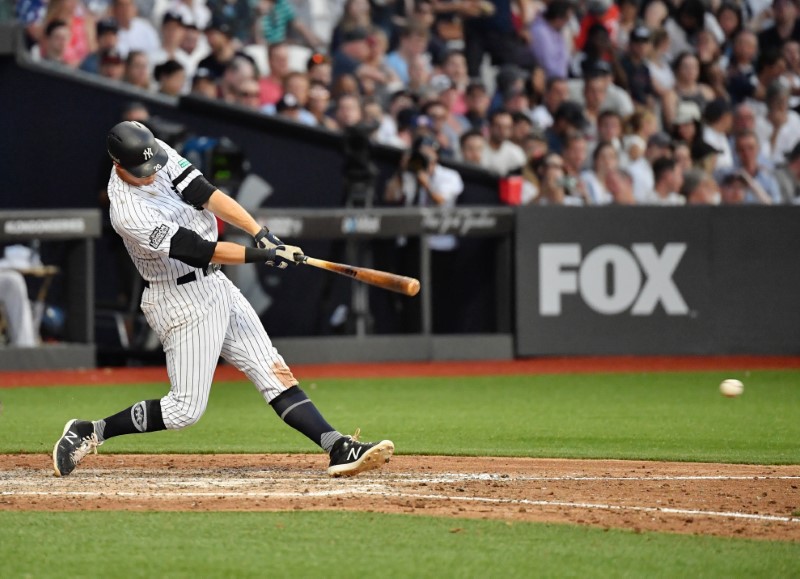 The two teams brought the fireworks for Major League Baseball’s first game in Europe. Taking advantage of a hitter-friendly setup at London Stadium, the offenses combined for 37 hits (19-18 Yankees) in the second highest scoring Red Sox-Yankees game in history.

Aaron Hicks, Aaron Judge and Brett Gardner all hit two-run homers for the Yankees, who extended their record streak of consecutive games with a homer to 30. New York won for the 12th time in its last 13 games.

Yuli Gurriel delivered his second walk-off hit in as many nights, roping an RBI double to the right-center field gap in the 10th inning to lift Houston over visiting Seattle.

Gurriel clubbed a solo homer in the 10th inning on Friday to push Houston to a victory in the series opener. His series-clinching drive Saturday came against Mariners closer Roenis Elias (2-1), who surrendered a leadoff single to Michael Brantley before unleashing a wild pitch that pushed Brantley into scoring position. Gurriel followed by walloping a 2-0 changeup that just eluded Mariners center fielder Mallex Smith.

Tim Beckham, Domingo Santana and Daniel Vogelbach all homered for the Mariners.

Danny Jansen hit a two-run homer with one out in the bottom of the ninth, and Toronto defeated visiting Kansas City.

It was the fourth homer of the season and the first career walk-off homer for Jansen. Scott Barlow (2-3) walked Randal Grichuk to open the bottom of the ninth and struck out pinch hitter Rowdy Tellez before giving up Jansen’s homer.

Cavan Biggio hit his first career grand slam, and Vladimir Guerrero Jr. hit a solo homer for the Blue Jays, who have won the first two games of the four-game series.

Nick Markakis and Austin Riley homered on consecutive pitches in the eighth inning for Atlanta, which took advantage of the latest implosion by New York’s bullpen.

The Braves have won the first two games of the three-game series against the Mets, who have dropped seven straight. New York has led in the sixth inning or later in five of those losses. Mets relievers have a 7.62 ERA this month, the worst mark in the majors.

The comeback made a winner out of Sean Newcomb (2-0), who tossed 1 1/3 scoreless innings of relief. Luke Jackson earned his 13th save by wriggling out of a two-on, none-out jam in the ninth.

Neil Walker homered and drove in three runs as Miami rallied from a five-run deficit and defeated visiting Philadelphia.

Walker’s two-run home run in the sixth snapped an 0-for-15 slide and began the Marlins’ comeback, cutting the Phillies’ lead to 6-3.

Starlin Castro and JT Riddle hit consecutive doubles that keyed a six-run seventh and put Miami ahead for good. The win was the Marlins’ fifth straight over Philadelphia.

Jon Gray (9-5) struck out eight in 6 2/3 innings in his second straight strong start. He has allowed just three earned runs over his last three outings. Wade Davis pitched the ninth for his 12th save in 14 chances.

Los Angeles has lost two straight to Colorado after winning 12 in a row against the Rockies.

Tempers flared after Chicago reliever Pedro Strop drilled Yasiel Puig with a 3-0 fastball in the left leg with two outs in the eighth inning. Puig tossed his helmet and walked toward Strop before initially being restrained by Cubs catcher Willson Contreras and first baseman Anthony Rizzo, then by teammate Joey Votto as players from both teams spilled onto the field.

Jason Heyward homered for the second time in as many days, and Ohio native Kyle Schwarber ripped an RBI double for the Cubs, who posted just their third win in eight outings against Cincinnati this season.

Machado drove in five runs with his 18th and 19th homers of the season, while Reyes’ two homers (Nos. 23 and 24) were both solo shots. Fernando Tatis Jr. later hit a 440-foot solo homer, giving the Padres 16 homers during a four-game winning streak.

Meanwhile, the loss was the fifth straight for the Cardinals, who have been outscored 30-10 during the skid.

Eric Thames tripled, homered and drove in two runs to help Milwaukee beat visiting Pittsburgh in the second game of their three-game series.

Milwaukee right-hander Brandon Woodruff allowed one run and six hits in 7 2/3 innings to become the fifth 10-game winner in the majors, and the first in the National League. Woodruff (10-2) struck out six and didn’t walk a batter.

Yasmani Grandal had two hits in the leadoff spot for Milwaukee, which had lost three of four and eight of 11.

Nelson Cruz and Max Kepler both homered twice to back six strong innings from Michael Pineda and lift visiting Minnesota over Chicago.

Kepler smacked solo home runs in the fifth and seventh innings for the Twins, who got their attack going with Cruz’s two-run shot in the first. Miguel Sano added a two-run homer in the eighth before Cruz punctuated the afternoon with a two-run blast in the ninth.

The Rays’ top pitching prospect, McKay went six innings and gave up one hit and a walk while striking out three.

McKay (1-0) retired the first 16 Rangers he faced before Danny Santana blooped a single to right in the sixth. After a sacrifice bunt, Shin Soo-Choo drew a walk, but McKay struck out Delino DeShields to end the inning and cap his day.

Right-hander Zack Greinke continued his mastery of San Francisco, and Eduardo Escobar ended a scoreless duel with a two-out, RBI single in the seventh inning, sending visiting Arizona to victory.

Three insurance runs in the eighth gave the Arizona bullpen just enough of a cushion in order to preserve the club’s fifth win in six games in San Francisco this season.

Blanked for seven innings by Greinke and in the eighth by two relievers, the Giants gave those who stuck around a thrill when Stephen Vogt drilled a three-run home run off Greg Holland to get San Francisco within 4-3. But Holland bounced back to retire the next three batters for his 12th save.

Niko Goodrum drove in two runs, while Nicholas Castellanos and Harold Castro scored two runs apiece for the Tigers. Victor Alcantara (3-1) was credited with the victory despite giving up two runs, one earned, in an inning of relief.

Anthony Rendon homered among three hits and drove in two runs for the Nationals, who had won nine of their last 12 games.

Anderson did not allow a runner to reach second base until Luis Rengifo doubled with two out in the eighth, the last batter Anderson faced in the game.

Anderson, who threw 63 of his 100 pitches for strikes, allowed only one other hit in the game — a single by Andrelton Simmons leading off the fifth. He walked two and struck out three, improving to 8-5.

Anthony Santander (MC:) and Chance Sisco also homered, and Andrew Cashner pitched seven shutout innings for the Orioles, who walloped the Indians by a 13-0 score for the second straight day.

Cashner (8-3) had arguably his best outing of the season. The right-hander allowed only three hits and one walk while striking out six.